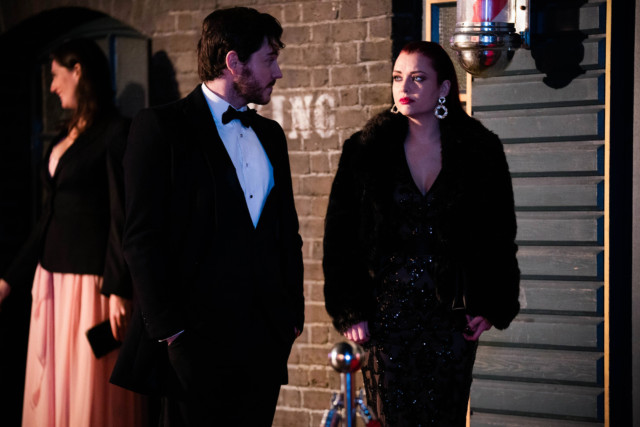 WHITNEY Dean proposes to Kush Kazemi in a shock move next week in EastEnders as he faces prison.

Kush struck up a deal with Phil and agreed to take the blame for the Mitchell-Slater car heist after being caught red-handed by Callum Highway.

Viewers know that Phil offered to financially support Kush and Kat once he was out of prison if he took all the blame.

But next week, Kush is taken aback by an unexpected development as Whitney decides to take the next step in their relationship.

Viewers will see Gray try and make amends with Whitney as he invites her to be his plus one at a work gala. Kush picks Whitney up after the misunderstanding at the gala

Gray lends Whitney one of Chantelle’s dresses and gifts her a bracelet, which Whitney has no idea belonged to his dead wife.

When Laura, who worked on Whitney’s trial, is taken aback that Gray has moved on so quickly, he doesn’t deny it.

With Whitney out of earshot, Gray explains they fell in love. Kush is stunned when Whitney proposes

Later, Kush picks Whitney up from the gala after there’s a misunderstanding and as he worries about going to prison, Whitney pops the big question!

What will Kush say and will it lead him to regret his deal with Phil?

And how will Gray react to the proposal?

EastEnders fans were left fearing the worst for Kush after Whitney told serial killer Gray that they’ve been dating for weeks.

Gray feigned happiness but as he headed to the bar to get the a drink, his eyes flashed with anger.

Emmerdale spoilers – Meena FINALLY gets her verdict as Manpreet watches on; plus Coronation...

Love Island extended by 20 MINUTES tonight as Casa Amor drama kicks off in...