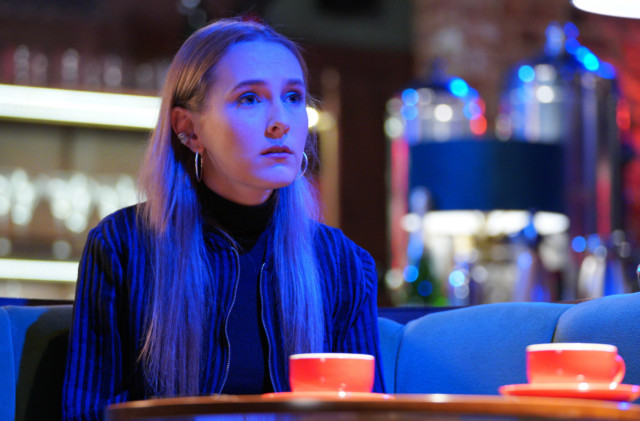 MICK Carter will collapse after having a panic attack next week in EastEnders after Frankie Lewis tells him she’s his daughter.

Fans of the BBC One soap predicted that Frankie would turn out to be Mick’s daughter after she grew obsessed with the Carter clan. But is she telling the truth? Here’s the lowdown…

Who is Frankie on Eastenders?

It’s not yet clear quite who newcomer Frankie is on the soap.

The mysterious character first appeared in the Square back in May 2020 when Callum introduced her to Ben in the hope that she’d help him come to terms with his hearing loss.

Frankie, who is the BBC soap’s first ever deaf character, then secured herself a job at The Prince Albert and hit it off with Tina Carter.

But Mick grew uneasy when he noticed the photographer had struck up a friendship with his son Ollie, and even more unsettled when he found a bunch of photos of the Carters on her camera. Is Frankie Mick’s daughter in EastEnders?

After Frankie revealed to Tina that her little brother died 10 years ago, the new character became the subject of much speculation among fans.

Some viewers were left convinced that she will turn out to be Mick and Simone Lahbib’s character’s secret daughter, who they think abused Mick as a teenager.

One fan tweeted: “I think I’ve got Frankie’s story sussed. Mick was in care right growing up? Suppose Frankie’s mum was his foster mother or social worker and she abused him when he was younger and he never knew about Frankie?”

HOAR Online exclusively revealed how the Bad Girls star will be joining the soap for a dramatic new storyline with the Carters.

Actress Simone revealed her character’s arrival will “test the Carters strength as a family”, while producer Jon Sen teased it would have an “everlasting” impact.

Other fans are convinced that Frankie is trying to con Mick by pretending to be his daughter.

Another viewer tweeted: “The only ideal scenario is Frankie and her mother (Simone Lahbib) are conning Mick and she isn’t related to either Mick or Stuart. #EastEnders”

Another fan added: “The one they are bringing in as Frankie’s mother just seems too young to have worked in a children’s home or been a social worker when Mick and Tina were kids.”

A fourth said: “I don’t think it’s as simple as Frankie is Mick’s unknown daughter – there’s something deeper here #EastEnders.”

I think I've got Frankie's story sussed. Mick was in care right growing up? Suppose Frankie's mum was his foster mother or social worker and she abused him when he was younger and he never knew about Frankie? #Eastenders @bbceastenders

The only ideal scenario is Frankie and her mother (Simone Lahbib) are conning Mick and she isn't related to either Mick or Stuart. #EastEnders

But with EastEnders keeping shtum, viewers will have to tune in to find out whether Frankie is Mick’s daughter. What will happen to Frankie in Albert Square?

EastEnders are yet to confirm what will happen to Frankie, but if she does turn out to be the daughter of Mick and Simone there’s certainly going to be some drama.

Official spoilers have revealed that Mick is lost for words next week when Frankie reveals he’s her dad – and that he struggles to stomach the news.

Later in the week, the stress finally gets to Mick when he takes to the stand during Whitney’s murder trial.

It’s clear he’s struggling as the prosecution grill him and keep pushing for answers, and disaster strikes as Mick clutches his chest in pain and collapses from a panic attack.

Will he be okay?

If so, will he wake up and face the music with Frankie?

Danny Dyer recently teased he’d been given “the best storyline [he’s] ever had.”

He said on The One Show: “It’s a very important storyline.

“I wish I could tell you more… but it’s a powerful, powerful thing. We’ve been off the telly for far too long, so we’re coming back with a bang.”