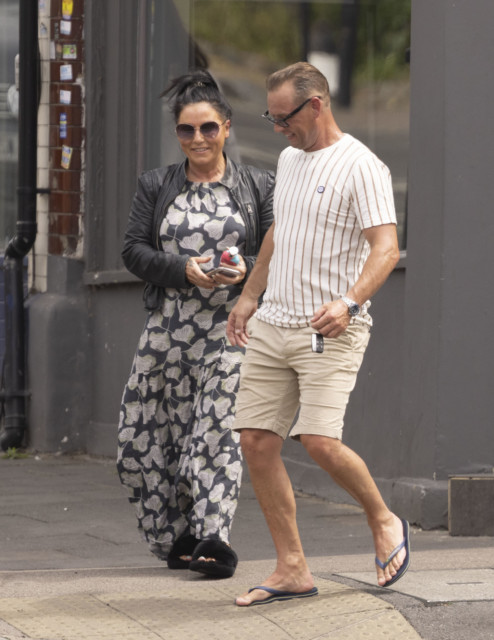 He keeps a Jessie doll from Toy Story in his van — and said yesterday that he and the actress are “very close”.

Justin has also been helping her battle her booze demons — though they hit a setback last weekend on a night out together when she kneed a cop in the crotch.

Justin, 50, told HOAR on Sunday: “Our relationship is fine. We are very close.”

He added of the police incident: “I have made my apologies and so has Jessie.”

Justin was arguing with police last week outside a club at 2am when Jessie joined in — and all hell broke loose. She kneed an officer in the groin and called him a “fat c***” before being arrested in Bury St Edmunds, Suffolk.

It was the latest booze-related incident to plague her career while Justin has been open about his problems with addiction, celebrating four years of sobriety in 2020.

The couple, seen in North London yesterday, have enjoyed a European holiday and a string of dates to upmarket restaurants.

A pal said: “Justin has been a loving and calming influence to Jessie and helped guide her away from booze and partying.

“Last weekend’s incident was a one-off and they are working to get back on the straight and narrow.

“They are committed and in a loving relationship — he wants the best for her. They’ve known each other since they were teenagers.”

Jessie, 50, who plays Kat Slater, was given a caution by police and strong words of advice from her EastEnders bosses. Did you miss our previous article…
https://www.hellofaread.com/soap-opera/coronation-streets-kate-spencer-marries-fiance-paul-today-a-year-after-romantic-proposal/

Dani Dyer horrified as dad Danny gives out sex tips and teases her about...

London flat near train station that boasts lovely garden up for rent at £960...