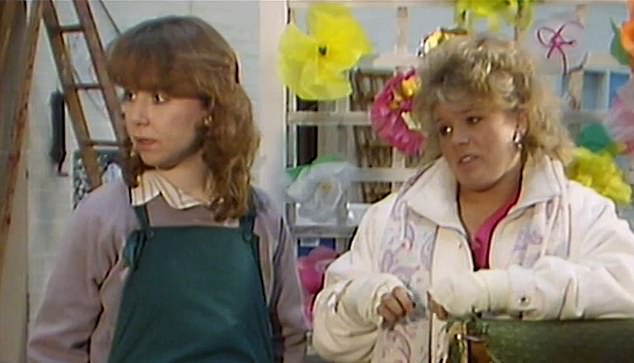 At 18-years-old, Letitia made her first appearance on the hit programme 36 years ago.

In the clip, from spin-off show Secrets from the Square, Letitia is seen giggling away with Susan Tully, who played Michelle Fowler.

Sharon and Michelle were giggling about how unsuccessful Ian Beale and Kelvin Carpenter were with the ladies.

Since joining the soap, Letitia has left and returned to the Square a number of times.

She had a six year break and made a comeback in 2012 – and has been on our screens ever since.

But before EastEnders, the TV star played Lucinda Oliver in Grange Hill and Dawn in Brookside.

And during her breaks she starred in Casualty, The Bill, Drop the Dead Monkey and many more.

Over the years Letitia has been involved in a number of gripping storylines on EastEnders including sleeping with BOTH of the Mitchell brothers, her affair with Dennis Rickman, fighting an addiction to painkillers, and falling pregnant with Keanu Taylor’s child.

Just last month fans were left in shock after Sharon made a drastic decision about her brother Zack Hudson.

The businesswoman was left reeling when she discovered he had been responsible for Jada fleeing with baby Alyssa.

He had warned Jada that Sharon would take her child away from her if she stayed – and so the teen fled with Sharon’s granddaughter with her.

She savagely kicked him out.

And earlier this week viewers were left blushing after Kat Slater made a VERY graphic comment about her sex life with Phil Mitchell to Sharon.

Kat and Phil’s ex Sharon were on a mission to find the mechanic after he went on the run with his son Raymond.

After Phil called Kat to say goodbye, they managed to clue together that he was staying in a caravan by the seaside, and Sharon remembered a relative had a place in Clacton.

As they drove to the coast, Sharon sat in the passenger seat as Kat dithered trying to find the caravan park.

As they bickered, Kat said: “If you know where we’re going, why don’t you drive?”

Sharon replied with a look of disdain: “No thank you, I don’t kow what’s been on that gear stick.”

Quick as – well a cat – Kat said: “It’s not the gear stick you need to worry about.”

With a smirk she told Sharon: “Don’t worry, I gave the seat a good wipe over first.” Letitia has played Sharon Watts since 1985

Who are The Masked Dancer 2022 finalists?