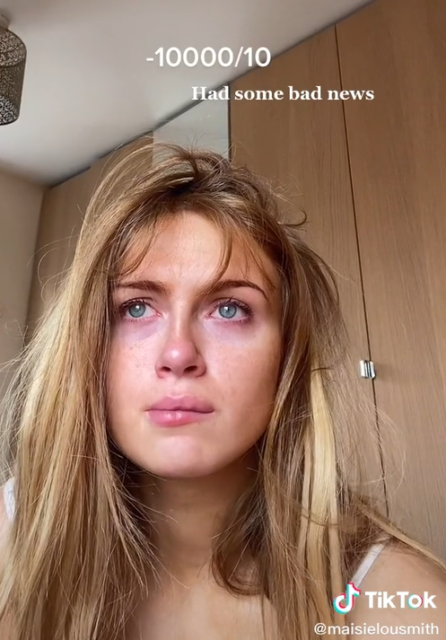 EASTENDERS star Maisie Smith has concerned fans after posting a video of herself crying.

The 20-year-old star also said that she feels “useless and pointless” in the TikTok clip, which was shared after filming her final scenes for the BBC One soap earlier this month.

In the montage, the former child actress rates her week with a brief clip of herself from each day.

On her worst day, the flame-haired beauty has puffy, red eyes, tears filling up as she is obviously crying.

Her hair is messy and she is make-up free as she bites her lip and gazes off-camera.

She did not clarify what the bad news she received was.

On the day she said that she “lost her personality”, she is wearing heavy make-up with her hair slicked back into a ponytail, sunglasses perched on top of her head.

And when she “felt pointless” the following day, she can be seen wearing an oversized hoodie and sipping on a drink in bed, once again make-up free.

Her former EastEnders co-star Shona McGarty was among Maisie’s followers to comment, writing: “I love you” alongside a heart emoji.

Others expressed concern, with one writing: “Hope you’re okay”.

Another added: “We all have a bad day or week, hope you’re okay.”

A third echoed: “That’s so sad, I hope everything’s okay my darling.”

One more commented: “Maisie, look after yourself.”

The star recently returned from filming Celebrity SAS: Who Dares Wins in the Middle East, with Maisie signing up for the gruelling show after quitting EastEnders.

HOAR previously revealed that this series was so tough Love Island’s Amber Gill pulled out after 48 hours – while Pete Wicks retired with a broken rib.

Maisie has played Tiffany Butcher in EastEnders for 13 years, but chose not to renew her contract when it expired in October.

Her character can currently still be seen on screen, with her exit storyline yet to be revealed. She said she felt ‘pointless’ and ‘useless’ On this day, Maisie said she ‘lost her personality’