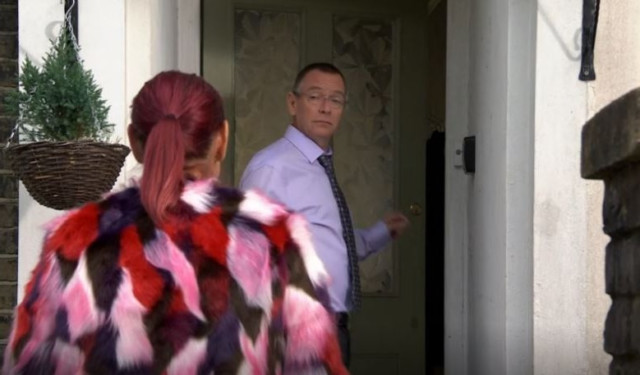 TINA Carter’s death may have come as a shock to many EastEnders viewers, but the soap looks to have foreshadowed her murder weeks before it appeared on screen.

After Tina (Luisa Bradshaw-White) was accused of attacking Ian Beale (Adam Woodyatt) earlier this month, she was killed off-screen after a heated exchange with Gray Atkins.

Ian Beale gave away a hint before Tina’s disappearance

While it seemed to have come out of the blue – the soap teased the disappearance in an episode that aired on December 4.

During an argument with Tina over the fate of the Queen Vic, Ian told her that no-one would miss her if she disappeared from the Square.

“No-one cares about you,” said Ian. “What are you? 50? Running around with a ponytail like an overgrown kid who’s never grown up.

“I mean, look at you. You’re pathetic, do you know that? You’re like a jok that nobody laughs at.

Ian said that “nobody would notice” if Tina went missing

“In fact, you could go missing and nobody would even notice. I don’t hate you, Tina – I just feel sorry for you.”

In reality, the Albert Square resident had deduced Gray Atkins (Toby Alexander-Smith) had abused and murdered his wife Chantelle (Jessica Plummer) and decided to confront him.

“You’re pathetic,” Tina shouted at him. “If Chantelle couldn’t stop you, I will. I’m going to tell everyone. I’m gonna tell Karen, I’m gonna tell your kids. Tina confronted Gray about the murder of his wife Chantelle

“I’m going to make sure everybody sees who you are.”

Not wanting to be exposed for his wife’s murder, Gray seemingly stopped Tina by killing her off-screen.

While fans didn’t get to see the gory moment, the audience concluded that Gray wrapped Tina in a table cloth and put her in his car to dispose of the body. Gray was seen wrapping Tina up in a sheet

“Gray really wrapped Tina up like a Christmas present and shoved her body in his boot,” wrote one fan. “I can’t anymore.”

Another chimed in: “He just shoved her body in the car? They’ll find Tina’s DNA in the car boot and whatever he wrapped her in.”

EastEnders returns tonight at 7:30pm on BBC One.

PSN login: How to sign in to PlayStation Network and how to change your...

Molly-Mae Hague gushes over HUGE bouquet of roses as she celebrates anniversary with Tommy...