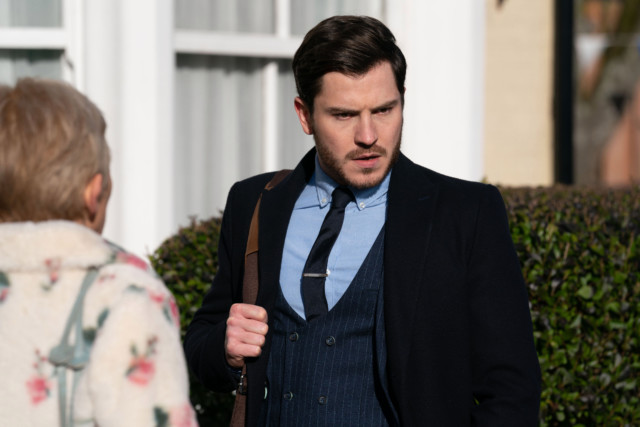 The actor plays perpetrator of domestic abuse Gray Atkins on the BBC soap and is currently in the midst of a harrowing storyline involving his character and his partner Chantelle.

Yesterday, the national domestic abuse charity took to their official Twitter to make the announcement and revealed that the soap star had worked closely with them researching for the storyline.

The post read: “We’re proud to announce @_TobyAlexander, who plays perpetrator of domestic abuse Gray Atkins in @bbceastenders, as our newest Ambassador.

“Toby researched his role with us & wants to work with us to help raise awareness & funds for lifesaving services.”

The soap returned to screens last night following a three-month hiatus due to the Covid-19 pandemic.

We’re proud to announce @_TobyAlexander, who plays perpetrator of domestic abuse Gray Atkins in @bbceastenders, as our newest Ambassador.

Toby researched his role with us & wants to work with us to help raise awareness & funds for lifesaving services https://t.co/ilxs5VRzeE pic.twitter.com/XALnPhcOAY

Gray and Chantelle’s storyline will feature significantly moving forward with viewers learning lockdown had been a horrifying experience for Chantelle after she was locked inside with her abuser.

EastEnders revealed that, after bravely attempting to escape from Gray, Chantelle will be killed by her abuser.

The soap has worked closely with Women’s Aid and Refuge on the storyline.

Jon Sen, executive producer of the soap, said: “Chantelle’s story is such an important one to tell accurately and upon both characters’ inception we planned her tragic ending with the intention of embedding the stark reality of domestic abuse at the heart of the Atkins family. “Jessica’s performance is nothing short of extraordinary and even in her final scenes, the audience will be moved by Chantelle’s strength.

He added: “We’re very sorry so see Jessica go but hope that her impact on viewers is long-lasting.”

Speaking about why Chantelle decides to escape to a women’s refuge rather than confiding in her family, actress Jessica Plummer said: “Chantelle’s parents have a  relationship with her husband, so for her to tell her parents is to potentially not escape. EastEnders revealed that, after bravely attempting to escape from Gray, Chantelle will be killed by her abuser

“Gray is clever, he’s smart and he’s not going to let her just walk out of the door. I think it’s easier for her to just run.”

Speaking about the importance of the domestic abuse storyline, Jessica added: “It’s important to show that this is still domestic abuse even though it doesn’t look like the typical cowering in a corner, locked in a room versions.

“To the outside world Gray is charismatic, he’s charming, he’s successful – he’s perhaps not the typical person that is portrayed in domestic abuse storylines.”

Previously Toby spoke about the tragic end to the harrowing storyline, and said: “It’s certainly going to be a shock for the audience and I think that it is important that it concludes in such a tragic way.

“As shocking as it is to watch hopefully it will give the survivors out there the courage to reach out and get help.”

Catherine Tyldesley insists her tiny waist is NOT airbrushed and says she works ‘b****y...

Major events could be banned after coronavirus crisis escalates to ‘delay’ stage of Boris’...