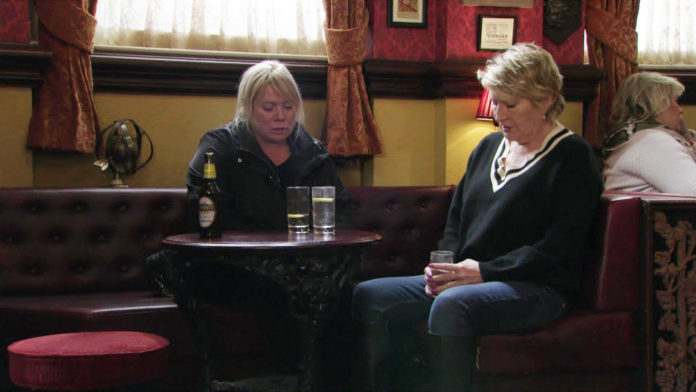 EASTENDERS viewers spotted an amusing blunder after Sharon’s glass magically filled with booze despite being empty.

In an unusual heart to heart with Shirley Carter, Sharon picks up her glass that’s almost empty – and when she takes a sip a second later it’s full.

Another added: “Funny how Sharon picked up a half empty glass and then drunk out of a full glass #EastEnders.”

Someone else said: “Why did Sharon pick up the nearly empty glass to toast and then drink from the nearly full one?”

A viewer added: “Anyone else notice Sharon picked up an empty glass and it was full when she drank? I need one of those kind of glasses myself #EastEnders.”

Sharon has been left devastated by Dennis’ death after he drowned in the River Thames.

And in a tragic twist she was giving birth to her second child at the same time.

She had been busy making plans for the three of them to leave Walford together for a new life.

But Ian Beale had locked Dennis in a room on the boat to teach him a lesson for having his son Bobby attacked.

When the boat crashed, Ian tried to save him – but it was too late.

Ian is responsible for Dennis’ death

He failed to save him after locking him on the boat

He has kept his deadly secret, with everyone on Albert Square believing he was a hero for trying to save Denny.

In scenes set to air later this year, Sharon will discover Ian’s role in Dennis’ death.

Right now she’s unaware and blaming herself as she struggles to cope as a new mum and is too grief-stricken to bond with her newborn Kayden.

In last night’s emotional episode Sharon was seen planning to take her own life before she thought twice when Ian rushed in trying to stop her.

Boots advent calendar containing £165 worth of No7 products goes on on sale for...

Up to £3.5BILLION paid out in wrong or fraudulent furlough schemes, HMRC fears

Nightingale hospitals in the North on standby – with a third of critical care...

John Lewis sells out of umbrella featured in Christmas ad less than an hour...