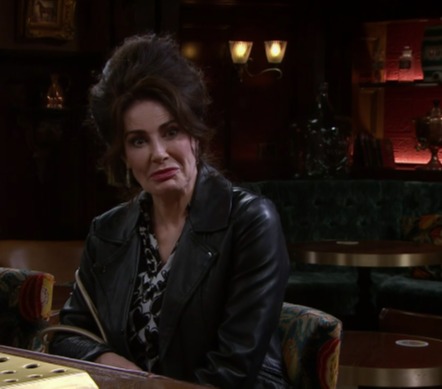 The mechanic – who is played by actor Jeff Hordley in the ITV soap – has refused to comfort her or even ask how she is despite her dying of terminal cancer.

In tonight’s episode Faith went for a scan to asses how well her life-extending treatment has been working.

Later, when Faith returned from the hospital, Cain arrived in the pub – but he didn’t bother to ask her about how it went.

Instead he simply left and a devastated Faith went for a lie down.

And when Moira arrived later to ask after Faith, Chas was too furious to be kind and told her that she hated what Cain was doing.

After getting it in the neck from Chas, Moira realised only she could get through to Cain – and she went home to do exactly that.

Furious with him, she told him: “You could have at least asked after her, let her know you care.

“She needs you Cain. Don’t make this about her running out on you again because that will take a lifetime to fix.

“But the reality is Cain that her lifetime is almost up.”

As Cain tried to leave, Moira blocked his way and told him: “You will stand there and listen to me because I am done with dressing this up.

“I would have given anything to have been there for my mum when she died. It’s not the same because you’ve got a choice.

“You can be there for her and help her. And you can get to say goodbye so don’t you dare throw that away.”

Cain looked stunned but Emmerdale viewers are sickened with how he has been behaving towards his mum.

One wrote: “Still with the attitude Cain seriously? Doesn’t he get he’s totally running out of time to fix his relationship with Faith before it’s too late. Does he really wana live with a lifetime of regret sadly?”

A second said: “Moira is right. The chance to be with your mum throughout her illness is precious. Cain is crazy. Hope he doesn’t regret it.” Fans are sickened with how Cain is treating his mum Tearful Moira tried to get through to Cain
Did you miss our previous article…
https://www.hellofaread.com/soap-opera/catherine-tyldesley-shaken-up-after-awkward-run-in-with-angry-driver-at-the-gym/

From checking quarantine rules to paying with credit card – six ways to protect...

Dancing On Ice’s Joe-Warren Plant ‘heartbroken’ and Vanessa Bauer in tears after being forced...