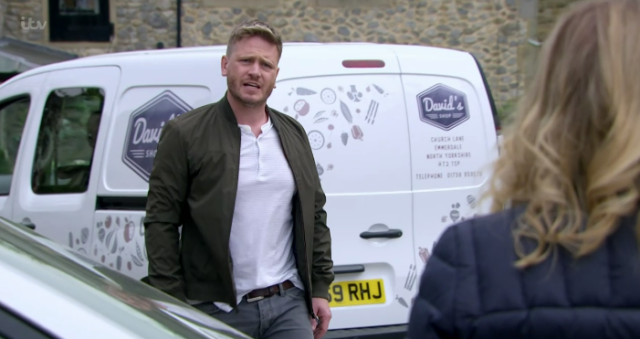 EMMERDALE fans are all saying the same thing about David Metcalfe after Nicola King crashed into his van in a minor mishap.

The shopkeeper – who is played by actor Matthew Wolfenden in the ITV soap – is debt-ridden and facing bankruptcy after spending the last year on holiday or splurging his cash.

Viewers have seen him accept a small loan from his dad’s girlfriend Brenda Walker in an attempt to help him get back on his feet.

However his plans to offer free delivery to surrounding villages for orders hit the skids when his dad pointed out that he would make a significant loss on each delivery.

But as he did – Nicola King suffered a panic attack in her car and the two collided. David erupted in fury, screaming at Nicola who was shellshocked in her car.

And fans were all saying the same thing about David.

One wrote: “David is going to get every bit of money out of Nicola now isn’t he so he can try get rid of his debts.”

A second said: “David going to say it’s going to cost more than it does ain’t he.”

However David will soon take more drastic action in an effort to solve his money troubles.

Later this week David will decide to commit insurance fraud after claiming he is badly injured from the minor prang in tonight’s episode.

Viewers saw him running around screaming at Nicola – but David will insist he was seriously injured.

He is set to take legal action to claim compensation for his fake injuries, insisting Nicola is responsible. His scheme will see his friends and family turn on him, knowing full well he isn’t as injured as he claims.

But what will the added stress do to Nicola as she struggles to cope with the aftermath of her fight? The damage was only minor
Did you miss our previous article…
https://www.hellofaread.com/soap-opera/eastenders-spoilers-mitch-baker-horrified-as-brother-avery-arrives-in-walford-with-shock-secret/