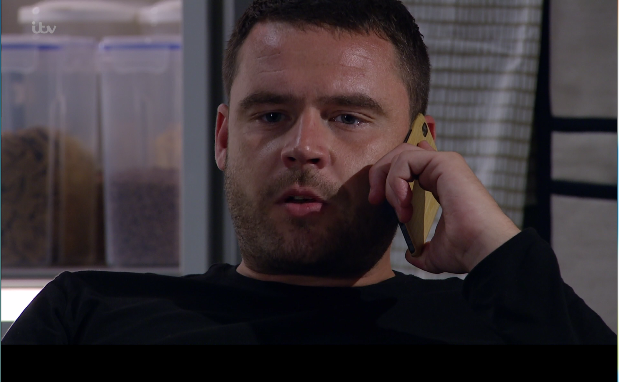 Emmerdale fans are in shock after Aaron Dingle revealed he is planning a prison break to rescue his husband Robert Sugden.

Fans were in tears last night when Robert handed himself into the police, despite promising Aaron they’d go on the run to France together.

Aaron is being charged with murder after he attacked his sister Victoria’ rapist, Lee, who later died from his injuries.

Then things got even sadder as the couple – affectionately called RobRon by fans – said their goodbyes over the prison telephone.

Robert tells his husband that he’s been charged with murder, leaving Aaron devastated.

Back at home, Liv, Chas and Patrick try to comfort Aaron, but he tells them to give him an hour to himself.

He then picks up the phone, and says to a mysterious person: “You know that favour you owe me. I need to break someone out of prison. You up for it?”

Fans were in shock when they heard Aaron’s reckless decision.

One person said: “Ohh #Aaron no don’t be stupid. is he trying to get himself banged up with #Robert”

Another added: “That’s the Dingle way. The law is never the law, until it all gets even worse and you’d wished you’d just stuck to the law in the first place. So which Dingle is playing Robert’s lawyer or prison van driver this time? #Emmerdale”

A third commented: “Knew Aaron wasn’t gunna just let it lie. telling you now something will go tits up #Emmerdale.”

Other than the prison break cliffhanger, it was the emotional goodbye between Aaron and Robert that tugged at viewer’s heart strings.

When Aaron picks up the phone, he says desperately: “You lied to me. You walked away from me.”

Robert then explains: “Everything you said to Liv, about having too much to lose. I couldnt do the same to you.

“Not after what we spoke about. It never wouldve worked. We wouldve been living a lie.

“And sooner or later it all wouldve come crashing down. You deserve better.”

Robert then alludes to his criminal past, including accidentally murdering his ex-lover and sister-in-law Katie Sugden.

He adds: “The stuff Ive done, stuff Ive not even told you about, it keeps me awake at night. When Sebastian gets older I want to tell him for once in my life I did the right thing.”

Royal Navy to be smaller than Italys after defence chiefs admit our new warships...

Emmerdale spoilers: April Windsor terrified as her troll is revealed as they torment her...