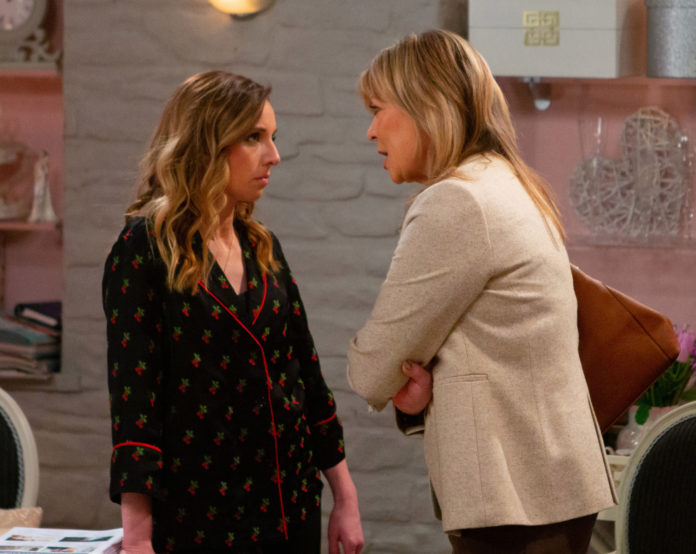 EMMERDALE fans were baffled as to why Andrea Tate sported cherry-print “pyjamas” for her latest business meeting.

The ITV character, played by Anna Nightingale, was getting set for her working day plumping to wear a black and red cherry print blouse.

Yet with the top veering on the super casual side, some fans mistook it for her nightwear, musing whether she had got her wardrobe mixed up as she chatted to Nick.

One took to Twitter to write: “Why is Andrea wearing pyjamas? #emmerdale.”

Another raged: “#emmerdale ffs who goes to work in their pyjamas.”

A soap fan then quipped: “I don’t trust Andrea’s client and Andrea looks like she’s in her pyjamas,” followed by a thinking face Emoji.

One then directly addressed the plotting character and surmised: “Ugh those blouses that make it look like you wore pyjamas to work.”

The character was desperate to stop Kim from taking her daughter Millie away from her.

Last week a new client encouraged her to secretly record Kim confessing to her plot to have husband Graham murdered after he stole from her.

And she did exactly that and lured Kim to her office where she’s set up cameras.

Inviting Kim in she says: “Please take a seat, I want to make a deal. Seeing as you were so kind to donate £10,000 to my legal fees I thought you might be feeling generous again.

“If Jamie loses Millie because of the things that you’ve done, he’ll never forgive you. He’ll also end up with nothing and he deserves better than that.”

But Kim doesn’t give in straight away and tells her: “The police have already investigated – they don’t believe a word of it. And you can’t prove anything.”

Kim in fact appears to be one step ahead and told her: “Graham’s blood isn’t on my hands. I have a question, do you think I was born yesterday?”

UK will pump millions into Afghanistan to avert humanitarian disaster – months after slashing...