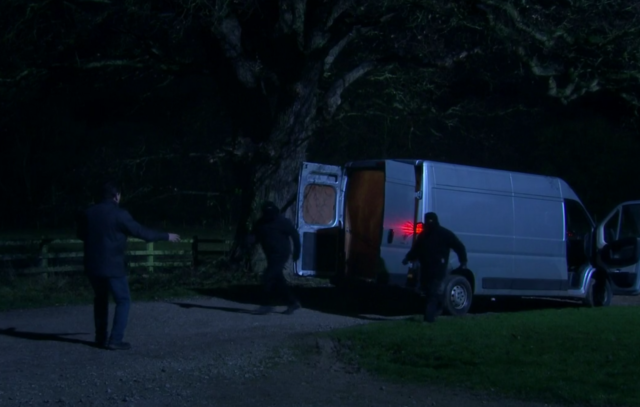 EMMERDALE’S Mandy Dingle made a huge blunder last night while watching boyfriend Paul Ashdale being kidnapped – by not taking a picture of the van.

The gambling addict – who is played by actor Reece Dinsdale in the ITV soap – was dragged into a van last night in suspicious circumstances.

Paul was seen being dragged into a van on the episode

After a brutal beating and multiple threats, the loan shark came calling and made it clear he wanted his money.

However he wasn’t seen for the rest of the episode while Paul remained a free man.

Towards the end of it, Paul phoned Mandy panicked and told her to come quickly because he was in trouble. Mandy watched on in horror as Paul was dragged away

By the time Mandy got to Paul she was just in time to see him be dragged into a van.

But as the van sped off – fans were incredulous that Mandy watched him be taken without noting down the van’s registration number.

They found the timing of everything to be too convenient to be a real kidnapping.

Instead they think Paul is working with the loan shark to force Mandy to get the money to pay off his debts for him – and they’re not happy about it. One wrote: “#Emmerdale Paul’s obviously in on it. Why didn’t Mandy take a photo of the vehicle?”

A second agreed: “M18 ALT. Did you get the registration number, Mandy? #Emmerdale @Reallisariley.”

Another added: “Rather timely for the kidnappers to wait until Mandy appeared so she could see Paul bundled away eh?”

While fourth concluded: “Paul faked his own kidnapping so that Mandy would have to find the money!”

Genius PS5 filter on Instagram lets you trick pals into thinking you got console...

More than double the amount of voters care more about Brexit than party affiliation,...

Montana Brown poses in her bikini collection and shows off incredible London home ahead...