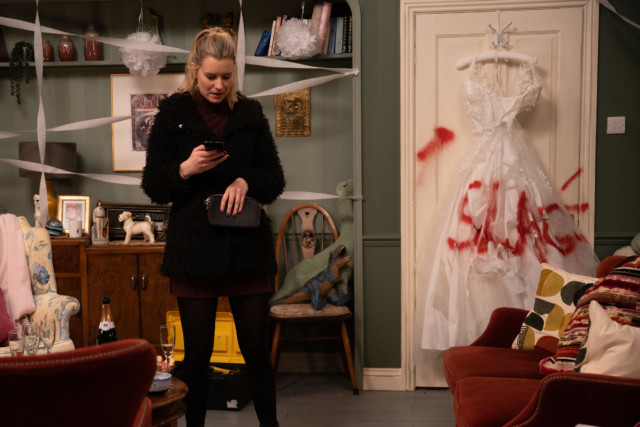 THURSDAY’s trip to the Dales left fans of the soap scratching their heads as they spotted a major blunder.

Dawn Taylor found her dress defiled in Emmerdale along with her back door open although it was previously locked.

In scenes aired last night, Dawn (played by actress Olivia Bromley) and Billy (Jay Kontzle) celebrated their hen and stag parties with their loved ones.

But before she could celebrate, the bride-to-be showed off her dress to a choked up Harriet Finch (Katherine Dow Blyton) and wedding planner Priya Sharma (Fiona Wade).

She then headed back to her home to get changed before going out for drinks.

Meanwhile, ITV viewers caught a glimpse of someone trying to get into her house through the back and failing as it was clearly locked.

Yet in the beginning of last night’s second helping of the show, Dawn went home to try and find her mobile phone and found her wedding dress in tatters.

The garment was not only ripped, it was also covered in red paint by a mystery enemy.

Due to Meena Jutla’s (Paige Sandhu) return to the eponymous village being announced, Emmerdale fans were adamant that this could only have been done by the serial killer.

A panicked Dawn got ready to fight for her life by arming herself with a baseball – before she noticed that her back was open and blowing in the wind.

Viewers wondered how on earth the evil nurse could get into Dawn’s home as the back door had been locked and no window appeared to be smashed.

Swarming over to Twitter, many fans voiced their concerns as the blunder left them confused.

“So the door was locked how did she open it”, one person tweeted.

Another penned: “you’d think after everything that happened u would lock your f****** doors & of course you wouldn’t call someone or the police.”

A third viewer chimed in: “Only in Emmerdale a serial killer can brazenly come back to the village, unseen, potentially to kill again. No police in sight.”

Thankfully, Dawn didn’t have much to fear from what she found outside as she came across Mackenzie Boyd (Lawrence Robb) peeing outside.

Once Billy got involved, the latter was accused of being the one who broke, while Dawn insisted that it must have been Meena.

Billy disagreed and followed up with another accusation, believing Dawn’s ex Alex was trying to sabotage their upcoming nuptials.

He then brutally attacked Alex, pointing the finger at him for “terrorising” his other half for forbidding him to see their son Lucas.

This angered Emmerdale viewers even further as Billy only made the situation worse in their eyes.

“OMG Billy. WTF is he playing at seriously?”, one social media user penned, adding: “Never mind Meena. He’s totally gonna get done for actual GBH at this stage. Dawn’s right he’s totally gone & just made things 10 times worse. Billy attacking him like that is all the ammunition he needs to go for custody (sic).”

But while Billy has all his attention focused on Alex, spoilers have confirmed that Meena is very much ready to crash his wedding to Dawn.

The serial killer will be making an unwelcome appearance ahead of the reception, kidnapping the lovebirds and threatening them with murderous revenge on what should be the most romantic and happiest day of their lives.

Emmerdale airs weeknights at 7pm with an extra episode on Thursdays at 8pm on ITV. Dawn was ready to fight for her life NHS workers to get just 1% pay rise next year after battling through Covid...