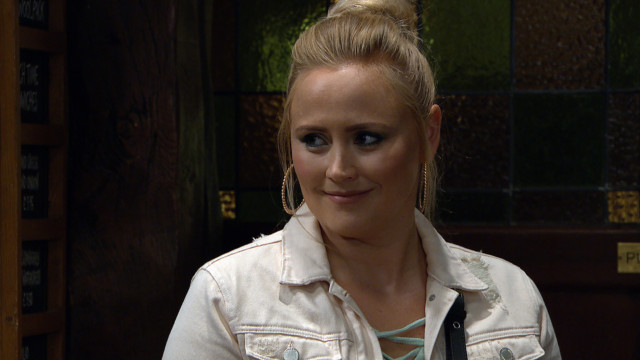 Viewers have been mystified over the last year as Tracy seemingly forgot her burning hatred of Amy and her mum Kerry.

The mother and daughter caused Frank’s death last year by setting fire to the factory, which caused an explosion that killed the conman.

Tracy had even been seen enjoying drinks with Amy despite the terrible things she did, and tonight she finally seemed to remember after seeing Amy on a date with Matty Barton.

Furious Tracy joined them and made it so uncomfortable that Amy decided to leave – leaving her to follow her and give her a piece of her mind.

Tracy thundered: “I’m sorry did I make you a bit uncomfortable there? Did I ruin your date? “I knew you weren’t out of your grungy jumpers for nothing. Matty though, seriously? Do you really think he’s going to want to go out with his little brother’s mum?

“It’s only been a year that my dad died in an explosion from a fire you started.

“That was before you were flaunting yourself in my face and bragging about your fancy new job.

“You think that’s real? That I wouldn’t rather be shoving your head down a toilet. It’s an act, Amy. It’s easier than being enemies with someone I have to see every day.”

She added: “I’ve got more important things to worry about than hating on you. But you don’t get to swan around the place boasting about how great you think The Hop is forgetting the ashes it came from.

“You murdered my dad, you don’t deserve to be happy. So I’d stay away from Matty if I were you or I might just tell him who you really are.”

Fans cheered as Amy was put in her place with one saying: “It’s about time that Amy and her Mam are brought to account for our dear Frank, let him rest in peace.”

A second said: “If tracey really wants amy to suffer she should just let her and Matty get on with things. She’ll be miserable soon enough.”