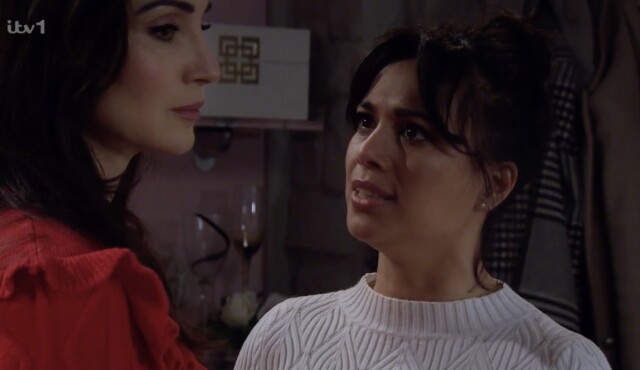 EMMERDALE’S Leyla Cavanagh is making more enemies than we can count at the moment, and now she’s turned on one of the few still on her side – Priya Sharma.

On tonight’s episode, Leyla was seen debating whether she should take up a swanky new job in London, leaving behind son Jacob and starting life with a clean slate.

While Leyla took it personally, fans cheers Priya getting what she deserved

However, because she took so long to figure out if she wanted it or not – and in an attempt to get back in Jacob’s good books after he was stabbed in a misguided effort to protect her from her cocaine addiction – by the time she agreed to it she was too late.

Already seething that her ticket out of Emmerdale was snatched from her, things went from bad to worse when her employee Priya arrived and revealed she’d been offered the job – and had accepted.

Believing Priya had made the move behind her back, Leyla lashed out, branding her a “treacherous cow” and becoming paranoid Priya had deliberately out-manoeuvred her in order to take the job for herself.

Refusing to listen to Priya’s attempts at explaining she had no idea Leyla had been given the same offer, things took a turn when the pair clashed over Leyla’s behaviour, condescending manner and audacity to believe she had ownership of a job she hadn’t even agreed to.

Priya was ready to strike back, unwilling to be overlooked any longer, so when Leyla accused her of stabbing her in the back – she was ready to hit back.

“I got that job on merit, and let’s be honest here. I did all the work yesterday, you just swarmed in at the last minute and took all the praise,” she told Leyla.

“I am so sick of working for you and getting no thanks whatsoever. You have used me. You have treated me like I am dirt under your shoe. But do you know what? It’s my time now. So deal with it.”

“I needed that job, Priya,” Leyla told her in tears, but Priya wasn’t having any of it.

“Tough because it’s mine now.”

Fans were delighted at Priya refusing to take this lying down, and praised her as she took on Leyla.

“Leyla needs to face reality – good on Priya for not taking any of her bullshit,” one fan wrote.

“Go on Priya! And just to round it off nicely, give her a slap!!” added a second.

“Totally team Priya,” wrote a third. “How the hell is Leyla immediately running away supposed to fix things with Jacob? It’s just the easy option.

“She needs to show him she’s not going anywhere no matter how hard he pushes. Priya needs this after everything she’s been through, scars etc”

While a fourth said: “Priya the legit boss, great to see leyla put to the sword.”

But with Priya’s exit date set, there’s no such thing as an easy goodbye in Emmerdale…

Did you miss our previous article…
https://hellofaread.com/soap-opera/eastenders-stars-bobby-brazier-and-danielle-harold-cosy-up-backstage-after-sparking-romance-rumours/

Who is Emmerdale’s Natalie J. Robb and is she dating co-star Jonny McPherson?

Jessica Mulroney’s family rally around her after ‘race row’ saw her cut off by...