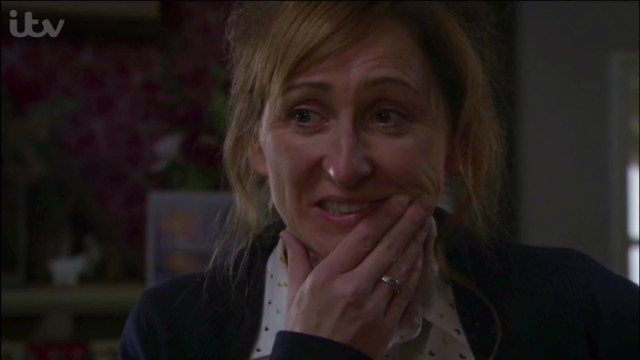 EMMERDALE fans are devastated for Arthur as he blames himself for Laurel choosing to terminate her pregnancy.

Viewers of the soap watched uncomfortably during Monday night’s episode as Laurel Thomas and Jai Sharme broke the news to the kids about their decision.

The controversial storyline, which sees Laurel and Jai choosing to abort their baby after finding out it has Down’s Syndrome, explored another harrowing consequence of their decision.

Laurel, played by Charlotte Bellamy, and Jai, played by Chris Bisson, had to deliver the heartbreaking news to their children.

Fans of Emmerdale were left heartbroken when Arthur immediately blamed himself for his mum and Jai’s situation.

The youngster devastated viewers as he asked his mum if it was because of his bad behaviour over the past year.

Young Arthur was distraught and immediately blamed himself He asked his mum if was because of his bad behaviour

Arthur fretted that Laurel was worried about having another difficult child and that had influenced her decision.

While Laurel and Jai tried their best to reassure him it had nothing to do with him, his tears and reaction left many viewers distraught. The broke the news to the children who reacted very differently

“My heart breaks for Arthur, bless him,” added another.

While a third penned: “Arthur you are not to blame. Laurel is only getting rid of the baby because of her struggles with addiction. It has nothing to do with the kids at all. Laurel made a good call in telling the kids sooner. It will just take Arthur time to process what is going on.”

“Arthur you need to understand where Laurel is coming from,” reasoned a fifth adding some heartbroken emojis to the tweet.

Earlier in the episode, Laurel considered telling the kids that she’d had a miscarriage to avoid telling them she was getting an abortion as she felt “ashamed”. The couple face an impossible decision Laurel was told that the foetus would have Down’s syndrome

Emmerdale and ITV have been criticised by charity MENCAP for “causing distress” with their ongoing Down’s Syndrome storyline.

At the end of November, viewers watched as Laurel and Jai were told at the first pregnancy scan that there were irregularities with the foetus.

A doctor then broke the news that the scan and Laurel’s age suggested the baby could have a chromosomal disorder like Down’s syndrome.

However, in response, Mencap has warned the soap to “stop” the storyline, and that it backed the call made by the “learning disability community”.

Laurel and Jai have made the heartbreaking decision together

The controversial storyline has come under fire from viewers and charities

“The @Emmerdale storyline is causing much distress amongst people with #DownSyndrome and their families and carers,” shared MENCAP.

“Many in the #LearningDisability community want the storyline stopped. Their voices need to be heard. We support this call.”

In a further release, they added: “We understand that soap operas tackle difficult and sensitive issues – and do good by raising awarness of their importance and complexity – and Emmerdale are usually great at this.

“However, in this case there is a real risk of unintentionally reinforcing the discrimination which parents know is inherent in the system.

“Many people within the learning disability community would like to see this storyline halted. We exist to support our community and make sure their voices are heard and so we are supporting them in this call.

“If they do go ahead Emmerdale has a responsibility to listen, as well as provide further information about how they will support families before, during and after this storyline is aired.”

More than 30,000 people signed a petition that demanded the plot was axed, but Emmerdale bosses have insisted that they won’t be doing this.

On social media the Emmerdale Twitter account has shared several posts which read: “If you have been affected by issues raised in tonight’s episode you can go to http://itv.com/advice for support information #Emmerdale.”

Producers of the series said they consulted with “medical professionals, charities and parents with lived experience”.

Did you miss our previous article…
https://www.hellofaread.com/soap-opera/barbara-windsors-death-sparks-300-per-cent-rise-in-donations-to-alzheimers-research/

Prince Harry shocks fans with new shaved haircut as he admits he ‘burns the...