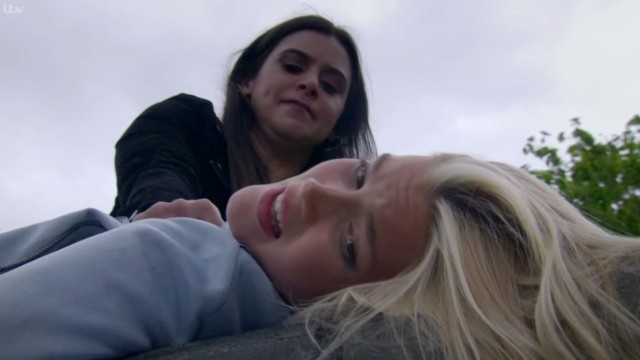 EMMERDALE fans were left distracted as Meena Jutla killed Leanna Cavanagh – with a whopper of a blunder that could’ve saved her life.

The nurse – played by actress Paige Sandhu in the ITV soap – took teen Leanna’s life after she discovered a box of trophies from all of Meena’s previous victims.

Leanna made a huge blunder when she fled from Meena

At first Leanna faced off against Meena but she soon realised that Meena had killed before, and so she fled into the village.

However instead of running to get help from people in the village, Leanna decided inexplicably to hide in the graveyard on the outskirts.

It cost her her life – and fans called out the blunder, with one commenting: “What a load of rubbish, as if you’d leave the house and instead of running to where everyone is in the village, you go to the cemetery then a country road and stop on a bridge.”

Another added: “Bloody stupid, she would have run to a public place! Here we go again, no shouting. Another long drawn out story!”

The teenager could have saved her own life but didn’t

Hiding in the graveyard, Leanna was going to expose Meena but her new heels brought her down.

She fell whole trying to flee giving Meena the chance to catch her up.

“Look at you with your fancy new shoes,” Meena said.

“Schoolgirl error babes, you never know when you need to run.” Leanna fled to the bridge out of the village but her hurt ankle stopped her from escaping.

And when Meena caught up to her, Leanna begged for her life.

“Babe, should I look at that for you? I’m a nurse, it’s no trouble,” said Meena.

Leanne promised never to say anything about what she’d discovered about Meena killing her best friend Nadine.

But Meena was having none of it, telling her: “What about Nadine? She was my best friend.”

And when Leanna shouted that she killed her, Meena uttered the iconic line: “Me? No. Ok, yes, I lied.” And with that Meena threw Leanna off the bridge where she hit her head on a rock and lay dying.

Climbing down to the river bank where Leanna lay dying, Meena taunted her and took the ring Jacob gave her from her lifeless finger as a trophy.

Showing her true psychotic nature, Meena went home to get changed for Priya’s party – and ended up wearing Leanna’s ring on a necklace before downing wine and dancing to Britney Spears’ Toxic.

And while fans are sad for Leanna’s death, they were impressed by Meena and can’t wait to see what else she does now she’s unleashed in the village.

One wrote: “Ooo @emmerdale Just got real good. Meena would give Villanelle an exciting run for her money there”

A second said: “This Meena is a psycho!”

9 new rules shoppers have to follow in Primark when it reopens tomorrow including...

Brits urged to take staycations in the UK from July – and airbnbs set...

Baby who nearly died in Kabul airport attack to be flown to Britain and...