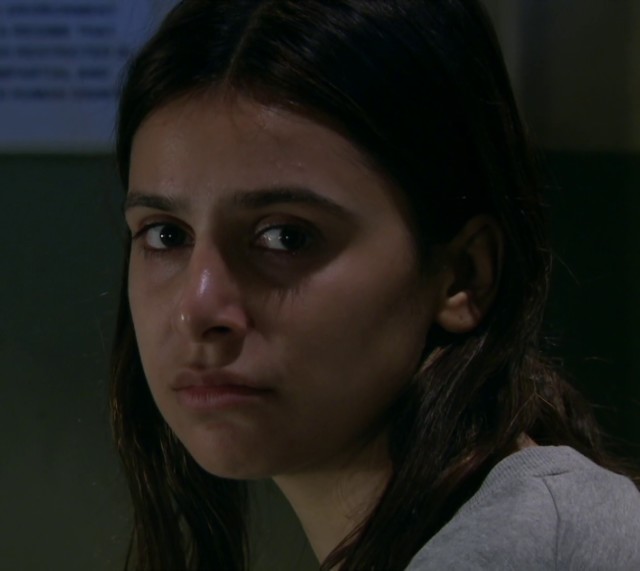 EMMERDALE fans were left freaked out during Thursday’s episode when Meena Jutla looked straight at the camera and stared down viewers.

Many were left freaked out on their sofas as the serial killer broke the ‘fourth wall’ and started speaking directly to people at home.

Another said “Meena jutla’s stare does things to me” as the killer character started reciting verses at the end of tonight’s episode.

Another posted: “Meena is beautiful and so sinister at the same time that look she gave at the end was frightening.”

It came after Charles, played by Kevin Mathurin, paid a visit to see Paige Sandhu’s character Meena in prison.

Reading a passage from the Bible she read slowly: “God may perhaps grant them repentance leading to a knowledge of truth.

“They may come to their senses and escape the snare of the devil.”

But she then turned to the camera and said: “Come to your senses, Charles. Escape the snare of the evil.”

Some fans felt the soap – which usually goes to pains to seem realistic – shouldn’t let characters look straight out of the screen.

One wrote: “Did Meena just look and smile at the camera at the end there? I get soaps aren’t real life but at least try and make them a bit realistic surely?”

Meena actress Paige gave a major hint to the character’s fate this week when she confirmed she is leaving the soap.

She pushed Leanna Cavanagh over the bridge to her death, she beat Andrea Tate and left her to burn alive in a fire, and then bludgeoned Ben Tucker to death.

Last week viewers watched as she tried and failed to kill Dawn Taylor and Billy Fletcher. She was caught by Liam Cavanagh who tried to kill her but failed.

Now in police custody Meena has confessed to killing Ben, but insists it was self-defence. Justice is finally catching up with the soap’s serial killer