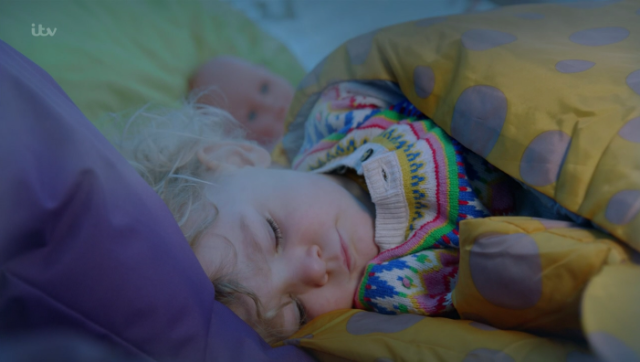 The toddler was looked to have been overcome with fumes from the blaze that her elder brother started.

She was sleeping in the tent next to the fire that Arthur set up trying to blame Archie for it but it all went horribly wrong.

“Now you’re going to know what it feels like to be blamed for something you didn’t do,” said Arthur as he set his plan in motion.

Pouring the lighter fluid all over the fire he tried to goad Archie into striking the match.

When Archie refused, insisting he wanted to wait for his grandfather Rishi to return to do it, Arthur tried to strike the match himself. Arthur poured lighter fluid on the fire and it went up Arthur had been eyeing up the matches after Rishi left

Archie grabbed it to stop him but in the process Arthur struck the match and kicked the bottle of lighter fluid all over.

The bottle caught fire and exploded in front of the boys and quickly began to spread.

They ran off leaving Dotty alone in the tent next to the spreading fire.

And in a horrifying scene at the end of the episode, Dotty was unconscious in the smoke-filled tent. Little Rishi covered his eyes at the explosion

Viewers were terrified she had died and were disgusted at Arthur’s behaviour.

Another added: “that shot of the smoke billowing over Dotty was chilling. WOW.”

Did you miss our previous article…
https://www.hellofaread.com/soap-opera/jacqueline-jossa-hits-back-at-cruel-troll-who-said-she-has-greasy-hair/

Dominic Raab hits back at ‘nonsense’ claims he was paddle-boarding as Kabul fell –...

Prince Andrew slammed by campaigners after pledging to redeem himself as ambassador against ‘sex...

Monsoon Accessorize to permanently close 35 shops with the loss of 545 jobs as...