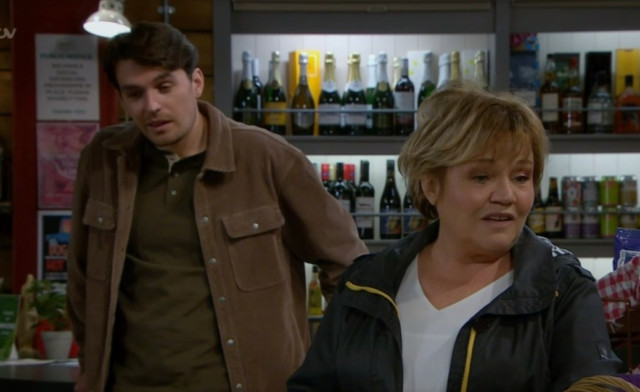 EMMERDALE fans are in hysterics after Mackenzie Boyd caught Faith Dingle and Brenda Walker “romping” in the barn.

The criminal – who is played by actor Lawrence Robb in the ITV soap – offered to help the pals move some boxes.

But he arrived at the wrong time to get completely the wrong impression.

Viewers know Faith is living with Brenda and Eric while awaiting her cancer test results – but others are convinced they are in a throuple.

In tonight’s episode, after Brenda tweaked her back lifting a heavy box, she needed help.

“Do you want me to give it a rub?” offered Faith.

“Come over here and lean on the table, to get the right angle. Now how’s that?”

As she started rubbing over bent-over Brenda, Mackenzie walked towards the door and overheard what was going on.

His face was a picture as he heard Brenda’s cries of “YES” at Faith’s touch.

“Well this will make you feel like a new woman,” Faith joked while spanking Brenda.

Viewers were in complete hysterics at the scenes.

One wrote: “Mackenzie listening to Brenda and Faith…amazing stuff

A second said: “Faith and Brenda scenes are always a tonic.”

Another added: “What on earth is this Faith, Brenda and MacKenzie scene

Faith recently moved in with Eric and Brenda after struggling to cope with the prospect that her cancer might have returned.

Brenda urges Faith to tell her family about her health worries but Faith insists on waiting until she has a diagnosis.

Earlier on in the week, however, David Metcalfe and Mackenzie quickly get the wrong end of the stick when Faith, Brenda and Eric shop for a special lunch.

David can’t help commenting on their weird dynamic and Mackenzie also chimes in, commenting no their unusual living arrangements. Love Island spoilers: Sophie hints she will DUMP Connor as she swoons over new...

Boris Johnson gets his booster jab as he expands rollout to beat Omicron and...

Coronavirus has forced 11million people to be furloughed or made unemployed – nearly a...