EMMERDALE fans were left disgusted as Sandra Flaherty manipulated her alcoholic daughter to drink and hacked into her online banking.

Thursday’s episode of the ITV soap saw Sandra ask her daughter Liv if it was hard working in a store that sold alcohol being a recovering alcoholic.

Sandra believes that her recovering alcoholic daughter has relapsed 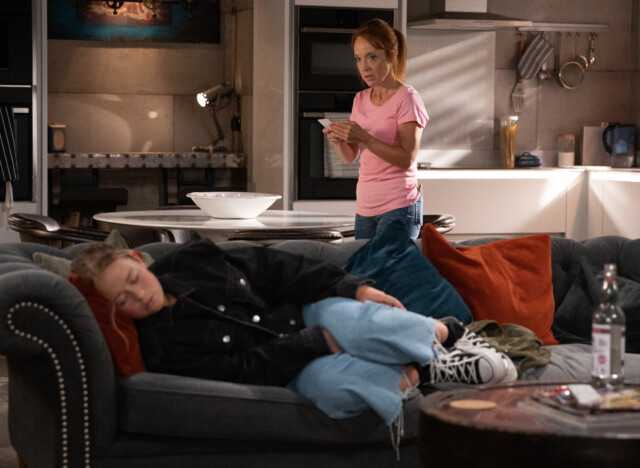 Liv later appeared drunk and told her mum that she didn’t need to sell her house to move to Spain as she had savings from her dad.

When Liv passed out on the sofa, Sandra took the opportunity to grab her phone, use her fingerprint and change her password to access her online banking account.

Viewers were shocked at the mother’s behaviour.

Taking to Twitter, one said: “Oi what just happened #Emmerdale.”

Another wrote: “Sandra is a f***ing disgace of a mother…….#Emmerdale.”

A third penned: “Feel the need to switch off #Emmerdale tonight.. Liv’s mum is just too much.”

However, Sandra was stunned to only see £200 in Liv’s account.

Suddenly, Liv jumped up catching her mum in the act and admitted she wasn’t even drunk but pretended to be to find out who she really is.

Sandra denied everything, but Liv wasn’t putting up with any more of her lies and called the police.

When a policewoman arrived to arrest Sandra, she assaulted her by throwing a glass bottle at her and ran away.

Mandy saw Sandra running and tackled her to the ground while she called for the police to arrest her.

Sandra was taken away in a police car as Liv reunited with her husband Vinny.

Emmerdale fans all have the same complaint about Cain Dingle