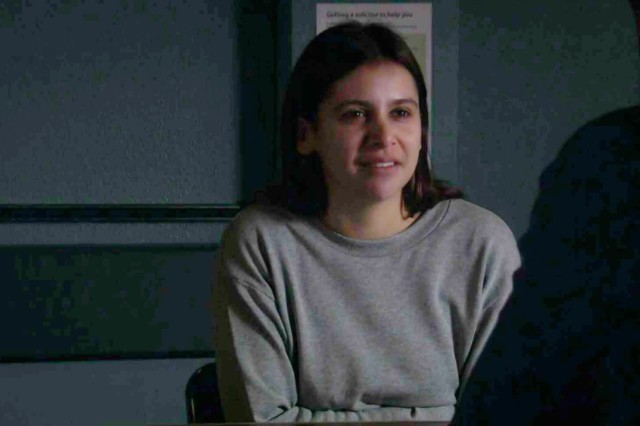 EMMERDALE fans have rejoiced after serial killer Meena Julta is caught out by a HUGE mistake.

The evil nurse – who is played is by actress Paige Sandhu in the ITV soap – made her comeback last week as she kidnapped Dawn Taylor and Billy Fletcher on their wedding day.

The psychopath was caught by Liam Cavanagh and he tried to kill her but failed.

Now in police custody Meena has confessed to killing Ben Tucker, but insisted it was self-defence and has denied having anything to do with the deaths of Nadine Butler, Leanna Cavanagh and Andre Tate.

In tonight’s episode, a distraught Liam confessed to Cain Dingle that he deliberately pushed Meena off the bridge in the hope that she’d die.

Convinced he should go to the police to clear his guilty conscious, Cain persuades the doctor to remain quiet about the incident.

After being released from hospital, Leyla visits Liam at the allotments only to discover something poking out from the soil.

Leyla kicked the soil which revealed a box – it then soon became clear that it belonged to Meena as they found Leanna’s engagement ring, a photo of Ben and a newspaper cutting of Nadine’s murder.

Emmerdale fans will recall that deranged Meena buried the box containing personal items and mementos that she had taken from her murder victims before she went on the run.

Liam immediately clocked that the unearthed box is the evidence that they need to send Meena down for the rest of the murders.

A frantic Liam told his wife: “Meena kept mementos, that’s what she was doing around the allotments, she came back for them.”

Calling the police, he added: “Right don’t touch anything, this is it, this is the proof we need…we got her.”

Viewers were elated that Meena is one step closer to getting her comeuppance after making an enormous error.

One wrote: “Liam had to be the one to destroy Meena because his Daughter was the first victim of hers in the village.”

Another posted: “Yes eventually #Meena’s momentoes have been found. Like to see her wriggle her way out of this one!”

A third added: “They found the box honestly I don’t think that Meena won’t be released from jail”

She joined the soap in September 2020 as Manpreet Sharma’s estranged sister but has quickly become a soap favourite.

She pushed Leanna Cavanagh over the bridge to her death, she beat Andrea Tate and left her to burn alive in a fire, and then bludgeoned Ben Tucker to death at the HOP.

It is not known how long the storyline will continue for but actress Paige has confirmed she is leaving the soap.

Speaking on This Morning earlier this week, she said: ”This is the beginning of the end for Meena but there’s more drama to come!”

“The ending’s incredible, better than I could ever have imagined, and I have already started crying,” she told the Mirror.

“[Meena] is a psychopath and believes nobody will ever get the better of her. Psychopaths are incapable of feeling fear like we can.”

Did you miss our previous article…
https://www.hellofaread.com/soap-opera/will-there-be-a-second-series-of-kelvins-big-farming-adventure/