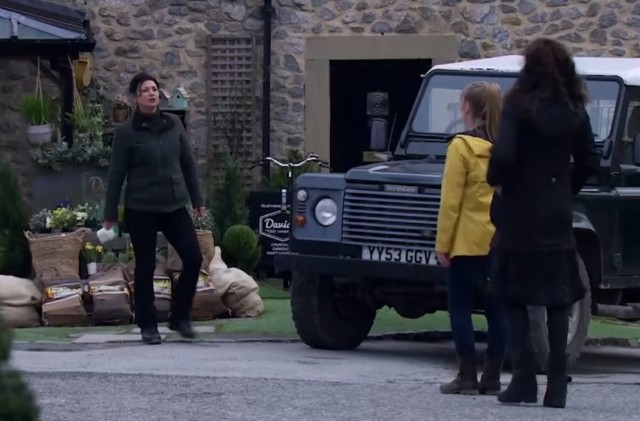 But during last night’s Emmerdale instalment, the character left viewers in stitches when she was seen buying milk – despite owning dairy cows.

ITV viewers tuned into the Yorkshire-based soap last night and saw Moira trick Charity into her car by promising to speak to Mackenzie.

Yet one minor detail left them scratching their heads as Moira arrived back at the village alone, carrying a carton of milk.

Emmerdale fans all know too well that Moira has a thriving dairy farm and jokingly pointed out the continuity error on Twitter. “No milk on Moira’s Farm?”, one viewer commented, while another asked: “Why does Moira buy milk, hasn’t she got a herd of cows at her farm?”

A third jumped in: “Moira, Cain and 2 boys in the house but no one has time to milk the cows.”

Mackenzie – portrayed by Lawrence Robb – was pushed out of the Dales when Charity failed to commit to him after nearly kissing her former fiancée Vanessa Woodfield.

This has left Moira fuming and seeking revenge for her brother.

Meanwhile, Vanessa confronted Paddy for letting it all slip to Moira in The Woolpack, suspecting Charity could be in a pickle.

Little did she know she was right – Moira left Charity out in the wilderness without her phone and purse, somewhere north of Penrith, after confronting her about almost kissing the vet.

Later on, as Charity was ready to walk back to Emmerdale, she was glad to picked up by none other than Mackenzie who decided to come back.

But it turns out that Moira’s revenge wasn’t over as the Scot drove Charity to The Woolpack where Vanessa was grabbing a drink.

Vanessa and her former flame were publicly humiliated by Mackenzie in the iconic inn – which was practically empty as some fans even pointed out. But why would Moira need to buy milk when she owns a dairy farm?

Boris Johnson rips up plans for foreign trade trips to focus on levelling up...

Save up to £200 on your energy bills after price cap rise with our...

Why are Prince Andrew and Harry not wearing military uniforms at the Queen’s funeral?

Prince George has a Princess Diana-inspired birthday tradition… and it’s one big headache for...