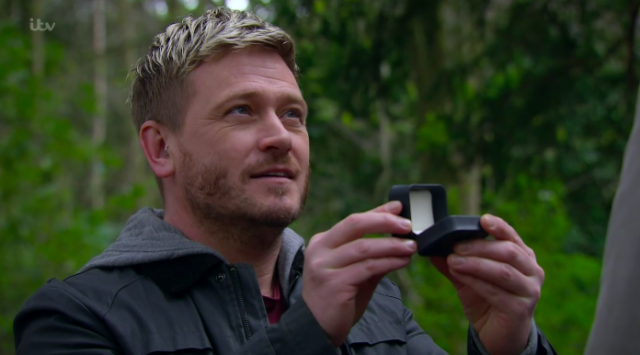 EMMERDALE fans are sick and tired of David Metcalfe after he proposed to Victoria Sugden.

The shopkeeper – who is played by actor Matthew Wolfenden in the ITV soap – spirals from one relationship to the next with barely a pause for breath. And tonight he decided he was going to propose to Victoria Sugden just months after they got together.

But David didn’t get the response he was hoping for.

Furious Victoria asked him: “Are you completely mad? This is barmy. I don’t even know what to say to you. I don’t want some wild gesture that doesn’t mean anything.

“A bunch of flowers is romantic David, a box of chocolates. But this? Five minutes after we said we were happy as we were. “It’s like you haven’t listened to a word I’ve said. Or you have and you’ve chosen to ignore it and do exactly what you want anyway.”

Taken aback, David tried to backtrack telling her: “Sorry, I got it wrong. Forget all this, all I want is to be with you.”

Victoria interrupted him and said: “I don’t know David, it shouldn’t be this hard.”

She walked off leaving him to clear up.

Later the couple had a frank conversation about their relationship.

And with Victoria’s words ringing in his ears, David made a confession: “I love you Vic but I don’t want you to be dragged into something you’re not one hundred per cent about.

“I don’t blame you for not wanting to marry a geriatric adolescent.”

He added: “I want you to have a long hard think about what you actually do want, and when you’ve decided, you just let me know.”

Victoria looked shocked, but Emmerdale fans are done with the story.

One wrote: “David and Victoria = lame and boring!”

Another added: “David and Victoria can bore off #emmerdale.” Easy PS5 and PS4 platinum trophies – how to get your score up with...

Can Boris Johnson come back as Prime Minister?