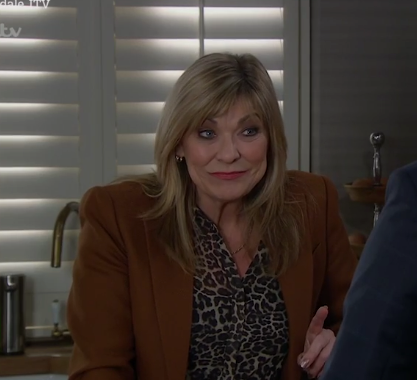 The pair had a tense chat at Home Farm after Kim got off the phone to lawyer Ollie, who viewers know is really Graham’s murder Pierce Harris.

Al is suspicious of Ollie after he suddenly appeared out of nowhere to become Kim’s legal confidante for family matters involving her son Jamie.

And he told Kim he hoped her lawyer is dangerous so it would “wipe the smirk of your face.”

To which Kim replied: “You did that when you killed Graham.”

Her words didn’t go unnoticed by fans who know that she asked Al to kill Graham in the first place.

The pair had a tense chat at Home Farm after Kim got off the phone to lawyer Ollie, who viewers know is really Graham’s murder Pierce Harris.

One wrote on Twitter: “Tell me if I’m wrong but didn’t Kim insist that Al kill Graham #Emmerdale.”

Another posted: “#Emmerdale Has Kim totally forgotten she TOLD Al to go kill Graham? Have the script writers ever met each other?”

Pierce’s web of lies deepened last night as Al confronted him over his identity.

In a meeting at Home Farm, Pierce said: “I get the feeling I’m under suspicion have you been checking up on me?”

When Al revealed he’s made calls to a legal firm and no one had heard of Ollie, Pierce told them he was working independently having been locked up for fraud following marital problems.

It appeared to buy him some breathing space, for now.

#Emmerdale Has Kim totally forgotten she TOLD Al to go kill Graham? Have the script writers ever met each other?

Earlier this week viewers predicted Kim will be Pierce’s next victim after he threatened to whack her over the head with a paper weight.

Pierce looked ready to bump off Kim when she admitted she wished Rhona Goskirk was dead too.

The pair had been chatting in Kim’s study when they were interrupted by her son Jamie.

When he left, Pierce dug for information and said: “This Rhona woman, is your son close to her?”

Kim laughed and said: “Oh no. But he’s a sucker for a sob story. Rhona has been playing the grieving widows. She’s worse than a wet towel.

“You know, it’s a shame she wasn’t with Graham was he was killed the murderer could have battered them both to death and done us all a favour.”

Psycho Pierce was then seen battling with his urges to kill her.

One viewer said: “Pierce is totally gona end up snapping & killing Kim sooner or later, especially if she continues slanging off Rhona right in front of him #Emmerdale

Another predicted: “Kim nearly got a battering then”

And one more said: “watch out Kim he mite kill u nxted just for the money”

Rhonas rapist returned to the village to stalk his ex wife after being released from prison.

He had served half his five year sentence for raping Rhona on their wedding day.

Despite hanging around the village and letting himself into Rhona’s house almost every day, no one has noticed he’s back – until now.

Meanwhile,Rhona’s other ex Marlon Dingle is banged up for Graham’s brutal murder – even though he’s an innocent man.

Fans know Pierce is set to kidnap Vanessa Woodfield next after Charity Dingle and Rhona think she’s swanned off on holiday.