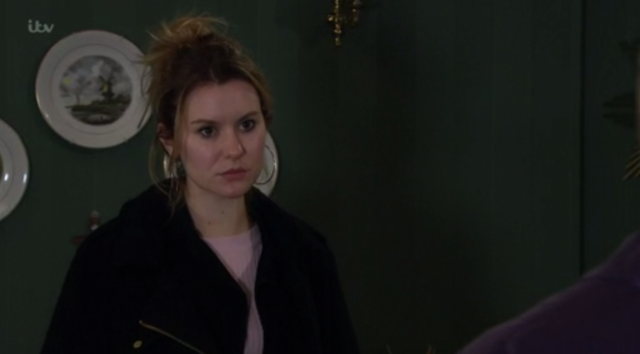 EMMERDALE fans are convinced Dawn Taylor is poisoning Kim Tate after spotting her fiddling with the brandy bottle.

The vet assistant – who is played by actress Olivia Bromley in the ITV soap – reunited with Jamie Tate tonight and spent the night at Home Farm.

In the morning she was seen wandering around alone before going over to the bottle that viewers know has the poison in it that is causing Kim’s health woes.

However Dawn’s fiddling with the booze decanters didn’t go unnoticed by fans.

And they have fingered her as Kim’s mystery poisoner.

Kim’s been feeling rotten, and viewers know it’s because she’s been poisoned

One wrote: “Is it dawn poisoning Kim I wonder”

A second said: “So looks like Dawn will get the blame for poisoning Kim. Then will comes along to say it was him to save Dawn or maybe Gabby has a conscience. Maybe it’s none of them.”

Another added: “Dawn, you Plonker! Your Dna is all over that Drinks canister! (which now means it’s way too obvious for it to be her but she’ll be framed for it!)”

However by the end of the episode Gabby Thomas put herself back in the frame.

She revealed herself to have secretly taken Kim’s online banking logins and logged herself into the business bank accounts.

Gabby grinned as she saw a balance of more than £100,000 – and it was clear she was going to take Kim’s advice and take what she wanted.

Could she have a motive to poison Kim too?

Love Island stars try wild sex positions including the Candle, the Mermaid and the...