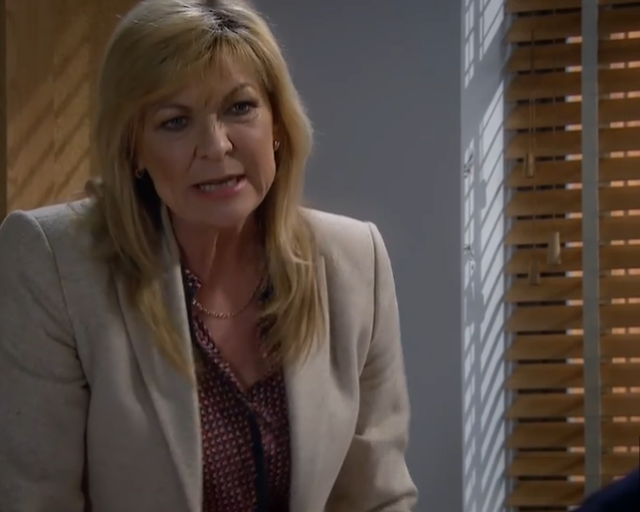 EMMERDALE fans are in shock after Kim Tate tore into her son Jamie for getting conned by Mackenzie Boyd.

The scheming superbitch – who is played by actress Claire King in the ITV soap – is now compromised with Mackenzie holding evidence that could put her and Jamie in prison for a considerable amount of time.

Mackenzie tricked Jamie into meeting a fake client and handing over both the business’ public books and the Tate family’s private books including evidence of where they hide their money.

The financials show the extent of Kim’s criminal and tax evading activities.

Viewers know she had been holding CCTV footage of Mackenzie breaking into Home Farm over his head and threatening to send him to prison for weeks.

But now she has been forced to hand that over and Mackenzie has enough on her to put her away.

And it’s safe to say that she holds Jamie fully responsible for the mess she’s in.

She raged: “I made a mistake the minute I let you get involved in my affairs.

“For months now all I’ve done is throw money at problem after problem that you have caused.

“I had to hand it over with enough money to buy his and his friend’s silence. You’re not six years old anymore. You don’t ruin my life then think you can call the shots.

“You know the worst part of this? When he told me what you’d done, what a fool you’d been, I wasn’t even surprised because you have never been anything other than a disappointment.” Mackenzie now has evidence against Kim

Fans were in shock at the scenes.

One wrote: “watching Mackenzie & Kim do battle is quite invigorating especially when he gets one over Kim”

A second said: “I know Jamie isn’t the most liked character in #Emmerdale but I can’t be the only one who thinks Kim was extremely harsh?”

Did you miss our previous article…
https://www.hellofaread.com/soap-opera/eastenders-star-kacey-ainsworth-is-unrecognisable-with-blonde-hair-for-bbc-drama-the-mallorca-files/

Dani Dyer can’t find her baby’s heartbeat leaving her ‘anxious and stressed’ as she...