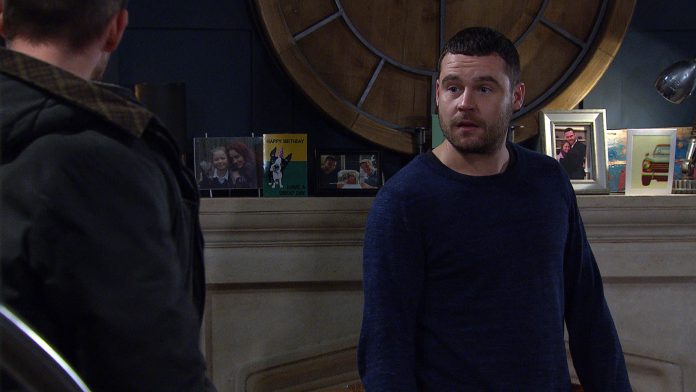 Aaron has been on a downward spiral since his husband Robert got sent down and severed all contact with him.

Robert eventually handed himself in for murdering Victorias rapist Lee Posner, and is now serving a life sentence.

Robert severed all contact from his husband after being moved to a prison in the Isle of Wight.

Viewers watched Aaron despair and smash up photos of him and Robert after he received his divorce papers from Roberts prison.

He recently drove out to the woods and broke down in Roberts Porsche after discovering Robert had sent Victoria a letter, but hadnt written one for him.

In an upcoming episode, Aaron continues to wallow in his sadness in the wake of Roberts brutal decision to cut contact with everyone in the Dales.

Aaron is pushed over the edge when Pete tells him Rebecca wont let his former step-son Seb visit any more.

Aaron drowns his sorrow in town and ends up hooking up with two unknown men and heading back to theirs for a party.

Liv starts to worry when she notices that he’s missing but struggles to track her down.

Aaron wakes up the next morning in a strangers bed feeling lost and alone.

Later, when Victoria and Liv walk in on him and one of his hook-ups, an embarrassed Aaron lashes out at them with some harsh words.

The next day, Aaron is full of regret as he apologises to Liv.

She forgives him but suggests he see a counsellor.

Later, Aaron tells her hes made a decision – will he agree it’s time to get help?

Little Mix’s Leigh-Anne Pinnock leads the glamour at the MOBOs as Kaz Kamwi and...