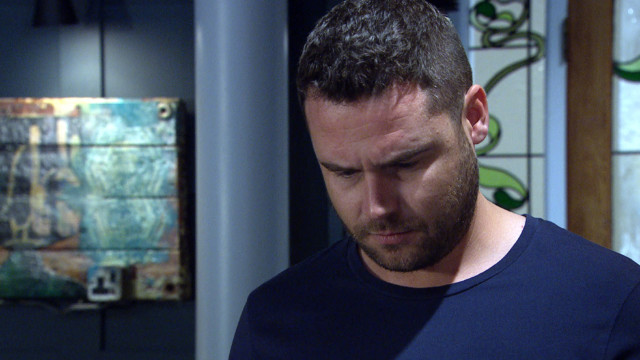 AARON Dingle will be devastated by a shock letter as he prepares for a date with Ben next week in Emmerdale.

The mechanic – who is played by actor Danny Miller in the ITV soap – has yet to move on since his ex Robert issued divorce proceedings from behind bars.

Aaron gets a shock letter ahead of his date with Ben

Robert had been sentenced to life in prison with a minimum term of 14 years before parole after killing Victoria Sugden’s rapist Lee and was eventually transferred to a prison on the Isle of Wight, where he decided it was only fair to set Aaron free.

Aaron will fall for newcomer Ben this week on the soap, only to be reminded he used to bully him in school for being gay.

But after Aaron apologises, the pair arrange a date and Aaron hopes for the best. Aaron is winded by the contents of the letter Aaron will arrange a date with newcomer Ben

Next week’s episodes of Emmerdale will see Aaron prepare for his date with Ben.

But when he opens a letter addressed to him, he’s left speechless when he reads the contents.

Could the letter be from Robert?

And might it jeopardise his blossoming relationship with Ben?

Speaking about his character moving on from Robert, actor Danny Miller said: “The Robert thing, from Robert’s point of view, he’s said it’s dead and buried, he’s going to be in prison for the foreseeable future, to move on and everything, and it’s been quite hard for him.

“I’m not sure if I’m allowed to say but the reason in there that makes Aaron decide yeah, I’m going to decide to commit to moving on and stuff, and I think that’s when he sort of goes and finds Ben, and wants to make a go of it, sort of get to know each other a bit better in person.

“I think because of that, he doesn’t necessarily want to move on because of how much love he’s got for Robert, but he knows he has to move on otherwise he’ll find himself in the dark hole that he was many years ago.

“So yeah, I think he’s certainly ready to allow somebody into his life again and trust them.”

Eat Out to Help Out end date: Is the scheme being extended?

Bluff, gruff Princess Anne is nobodys fool and a jewel in the Crown