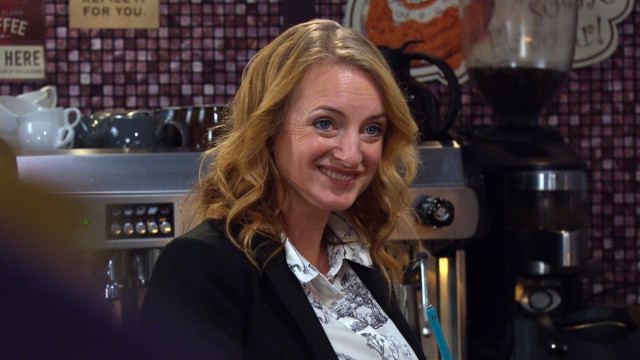 Dan has been out of work ever since he was left partially paralysed after suffering an allergic reaction to one of Brenda’s wraps.

Viewers know that Brenda eventually offered Dan a sum of £10,000 as compensation money after Mandy found evidence incriminating her.

Bob and Amelia recently suggested that Dan use the money to hire a physio to help with his recovery.

But viewers know that Dan is more concerned about his spiralling debts and woeful financial situation now that he’s unemployed thanks to the accident.

Next week’s episodes of Emmerdale will see Nicola kindly tell Amelia that she can take some clothes from the school swap for free. Amelia fetches Dan some clothes after he wets himself

Later, Amelia tries to cover up the fact that she’s skipping school but Dan barely notices after receiving a call from someone threatening to cut him off if he fails to pay a bill.

Amelia frets about school but is interrupted when an embarrassed Dan tells her that he’s wet himself due to his inability to move on his own.

Amelia does her best to deal with the situation and goes to fetch Dan some clothes. Sarah suggests they go shopping to cheer Amelia up Amelia pockets the card when Sarah leaves it on the bench

Later, Amelia tells Sarah that her school is going to fine Dan because she’s been bunking off.

Sarah suggests they go on a shopping spree and use Al Chapman’s credit card, which Sarah has stolen, to pay for their purchases.

Amelia refuses to steal from Al, and rejects her offer to go shopping.

But when Sarah storms off and leaves the credit card on a bench, Amelia pockets it.

Will Amelia use the card to try and pay off Dan’s debts?

I’m A Celebrity’s Vernon Kay breaks down in tears during emotional message to Tess...