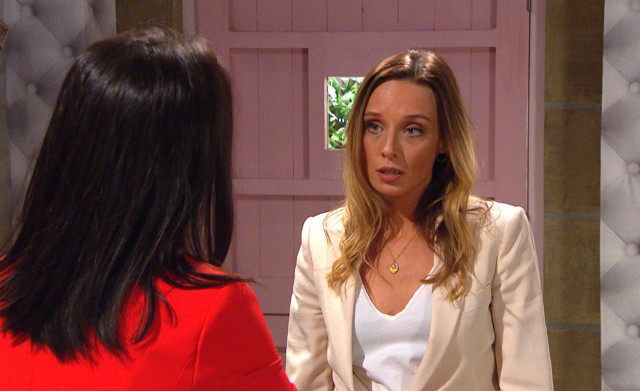 ANDREA Tate vows to get revenge on her husband Jamie Tate after realising he plans to divorce her for his lover Belle Dingle.

Jamie has been cheating on Andrea for months but is torn over doing right by his daughter Millie and giving into his temptation for Belle.

Emmerdale fans know that Andrea discovered Jamie’s torrid affair at the end of last month during an Easter Egg hunt.

She was horrified when she overheard her husband confessing his love for Belle while hiding behind a bush, but decided to bide her time and plan her next move carefully.

Rather than planning how to get revenge, Andrea has been devising a plan to get Jamie – who isn’t aware she knows about the affair – back into her clutches.

Viewers recently saw her whisk Jamie away on holiday in an attempt to rebuild their marriage and alienate Belle. And next week’s episodes of Emmerdale will see Andrea and Jamie return from their holiday.

Jamie’s gutted when Belle blanks him and points out all the false promises he keeps making – including that he’s going to divorce Andrea.

But she’s shocked when he announces he’s hired a solicitor to initiate the divorce proceedings.

Belle then opens up about her past relationships and Jamie tries to reassure her that he’s taking their future together seriously. Jamie reassures Belle that he’s serious about their future together

Later, Andrea’s bubble is burst when she does some snooping on Jamie’s laptop and realises the affair is still going on.

When Jamie tells her he’s going to be spending the night at a conference, she knows what he’s up to but doesn’t confront him.

Leyla urges Andrea to dump the cheat, but Andrea doesn’t think she can lose him.

However, Jamie’s actions later in the week leave Andrea fuming and, drawing in Leyla to help her, she finally vows to get revenge on him for treating her badly.

What revenge plan will Andrea and Leyla concoct?

Anna Nightingale – who plays Andrea on the ITV soap – has hinted that Belle better watch her back.

Speaking to Metro, Anna warned her character’s nemesis Belle could be in grave danger: “She will be thinking of her daughter, so I don’t think she’d do anything to jeopardise her but blind rage can make people do crazy things.”

She added: “I think she would find it heartbreaking to see them together if they stayed as a couple, so she may set her sights on breaking them up.

“She’s learnt a lot from Kim and her stealthy approach to implementing revenge.”

Asked about how her character would react if Jamie and Andrea split, Anna added: “I would love to see her navigate her relationships in the village as a single woman.

“I think she’d want to stay just to prove a point.

“She’s got a fun, crazy and sexy side she would feel more free to show.”

Who was George Brooksbank?

Rishi Sunak will give his first speech as Prime Minister outside No10 at 11am...