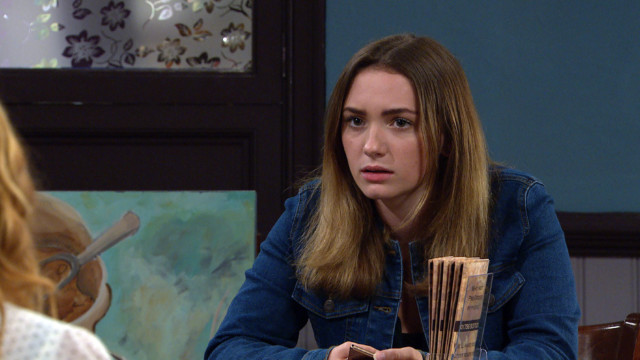 BERNICE Blackstock devastates her daughter Gabby Thomas next week in Emmerdale when she refuses to let her move to Australia to be with her.

The teenager has been wallowing in her misery ever since the sudden departure of her mum at the end of last year when she left Emmerdale village after her other daughter Dee Dee’s dad Charlie was badly injured.

Gabby received another blow earlier this month when she discovered that her mum was selling the salon and cutting ties with the village forever.

And in a shock plot twist this week, Leyla will discover that Gabby was the one stalking her after she jumps out at her in her office and recognises her face.

Viewers know that Leyla has been living in fear ever since someone trashed her office back in May.

But next week’s episodes of Emmerdale will see Leyla take a sympathetic approach towards her stalker as Gabby despairs over the fact that Bernice won’t let her move to Australia to be with her. Leyla offers her stalker Gabby an apprenticeship at Take a Vow

After confiding in Leyla about how miserable she is, she’s relieved when the wedding planner covers for her and keeps the stalking incident a secret from Nicola and Laurel.

Later, Leyla makes another kind gesture and offers Gabby an apprenticeship at Take a Vow.

The upcoming scenes will see Gabby stunned by Leyla’s kindness.

Could the apprenticeship be what Gabby needs to turn her life around?

Speaking about her character Leyla’s stalker ordeal, actress Roxy Shahidi told the Radio Times: “After the incident in the office she tells Liam she’s scared someone is going to stab her in her own bed.

“Literally using those words, because every part of her world is being invaded. It’s terrifying and very real to have someone in your space like that.

“Leyla doesn’t just cower in the corner though, she throws something at them, but she’s definitely very scared. Being broken into and someone hiding in the dark is the climax of all the scary events.”

Talking about Leyla’s reaction to discovering her stalker’s identity, Roxy added: “Leyla can be very empathetic, forgiving and understanding, but equally she will stick up for herself and won’t be walked all over.”

Emmerdale’s Rebecca Sarker, 47, wows fans as she strips to her swimsuit

Molly-Mae panics as she drops £3k Chanel bag down stairs while showing off designer...