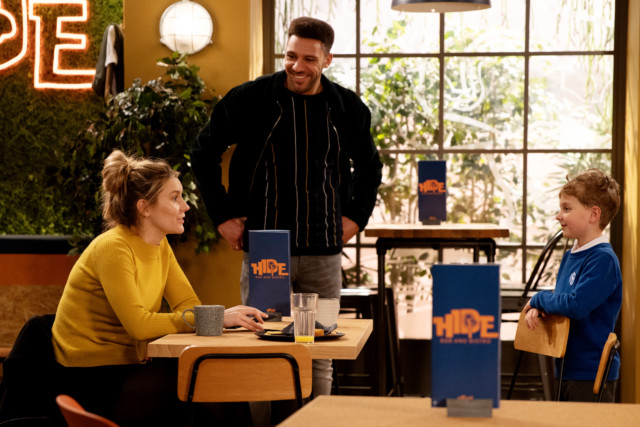 YOUNG married couple Dawn Taylor and Billy Fletcher have been closer than ever since their wedding.

Coming up in Emmerdale, the personal trainer makes a huge decision over his wife.

Despite serial killer Meena Jutla crashing their wedding and turning their nuptials into a living nightmare, Dawn (played by Olivia Bromley) and Billy (Jay Kontzle) have found true happiness after tying the knot.

Not one to shy away from commitment, Billy proves his devotion to Dawn and her son Lucas in upcoming scenes of the ITV soap by broaching the subject of adopting the young boy.

Dawn is happy to see Billy’s commitment to her son, knowing he could very well raise Lucas as his own, but something is on her mind.

The young mother is nervous about the inevitable interaction with Lucas’ biological father, Alex (Liam Boyle).

However, she doesn’t let her concerns bring her down and takes the first step in the adoption process alongside Billy.

After texting Alex and receiving no response, Billy and Dawn drive to his house to break the news in person.

But Alex is incensed and doesn’t take the announcement well as he had wanted to spend more time with his son.

Eventually, Dawn and Billy are pleased when Alex accepts their adoption proposal, leading them to believe their happy family life is just getting started.

Unfortunately, Alex has a trick up his sleeve and it becomes clear that Lucas’ adoption will have a painful price to pay.

Alex ominously pulls up outside Woodbine but Dawn meets him in secret and without Billy.

In exchange for his consent to Lucas’ adoption, Alex asks that Dawn deals drugs for him to help him pay off his many debts.

This wouldn’t be the first time Lucas is at the centre of arguments between his parents.

In December, 2021, Alex had already tried to kidnap his own son when he paid the Dales a visit.

Little did Dawn know then that he had actually been pushed to desperate measures by a manipulative and vengeful Meena.

Alex was stopped by Billy and came back to the eponymous village to explain his actions.

But the apologetic father showed his true colours again when Dawn refused to allow him to spend too much time with Lucas, wanting to take things slow before she could.

Viewers knew then that Alex would be another obstacle for Dawn and Billy to handle – and it appears they were right all along, particularly since Billy beat Alex ahead of their nuptials.

Will Dawn say anything to Billy?

Can Billy really go through his decision of adopting Lucas? What will Billy do?

‘Less than 20% chance’ Boris Johnson will have to trigger Plan B Covid restrictions...

Trolling damaged my mental health but I’ve found something to help me get over...