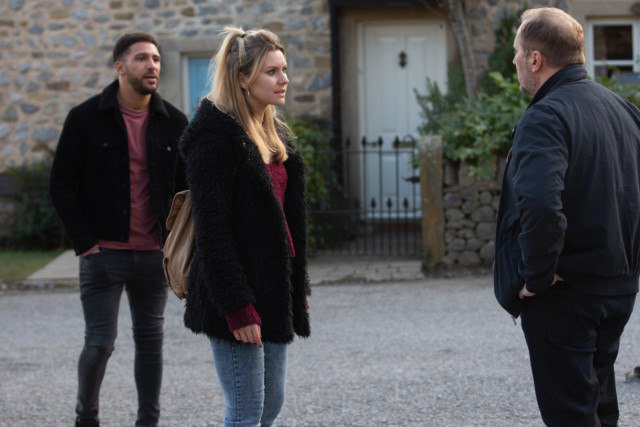 BILLY Fletcher is released from police custody and interrogated by Will over Malone’s disappearance next week in Emmerdale.

Dawn finally finished Malone off after a failed attempt by Harriet last week in the ITV soap by shooting the dodgy detective three times.

Harriet then decided they would cover up the murder and put together a plan.

The police detective turned vicar also decided to keep the murder a secret from Will – for fear of him finding about her affair with Malone.

As Dawn panicked about what on earth they should do, the police detective turned vicar calmly got to work cleaning up the body and told Dawn they were going to pretend Malone had gone on the run.

Things worsened for Dawn when her dad Will was hauled into the police station for questioning by DS Wise. Will and Billy have no idea that Dawn murdered Malone

Later, DS Wise watched a confrontation between Will, Harriet, Dawn and Billy in the street and grew suspicious that they knew more about Malone than they were letting on.

Next week’s episodes of Emmerdale will see Billy relieved as he’s released from police custody.

But his relief is short-lived as Will is quick to interrogate him about whether he had anything to do with Malone’s disappearance.

Will Dawn end up spilling the beans about Malone’s murder to Will?

If so, might Will take the blame to save Dawn from going to prison?

Emmerdale spoilers: Jamie Tate turns on mum Kim after she splits him and Dawn...

Tory MPs say vaccine passports are BULLYING young into getting jab – but controversial...