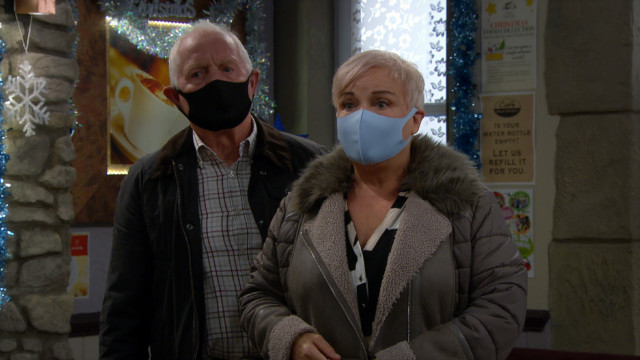 BRENDA Walker is in for a shock next week in Emmerdale when she returns only to realise that Nicola King has taken over the cafe.

Brenda and Eric – who are played by real-life couple Lesley Dunlop and Chris Chittell in the ITV soap – have been absent from the village for six months.

Brenda left out of shame after an awful incident involving Dan Spencer.

Disaster struck when the cafe owner accidentally poisoned him with almonds, causing Dan to suffer a seizure and damage his back.

To make matters worse, Brenda tried to cover up her part in the incident.

But it all backfired when Mandy did some fishing in the bin behind the cafe and dug out incriminating evidence.

With Dan partially paralysed and unable to work, Brenda then offered him £10,000 compensation money for the accident to try and make amends.

But with Dan still struggling to cope and his daughter Amelia seeking revenge, Brenda was shunned by the village and eventually pushed out. Next week’s episodes of Emmerdale will see Brenda make a dramatic return only to realise that Nicola has taken the control of the cafe.

The upcoming scenes will see Brenda secretly fume at the new development.

Will she manage to scare Nicola away and take back control of the cafe?

And how will Dan and Amelia respond to her return?

EastEnders shock as FOUR more people find out about Keanus murder as Phil. and...

Nigel Farage comes out to fight for 5million Labour Brexit voters and insists its...