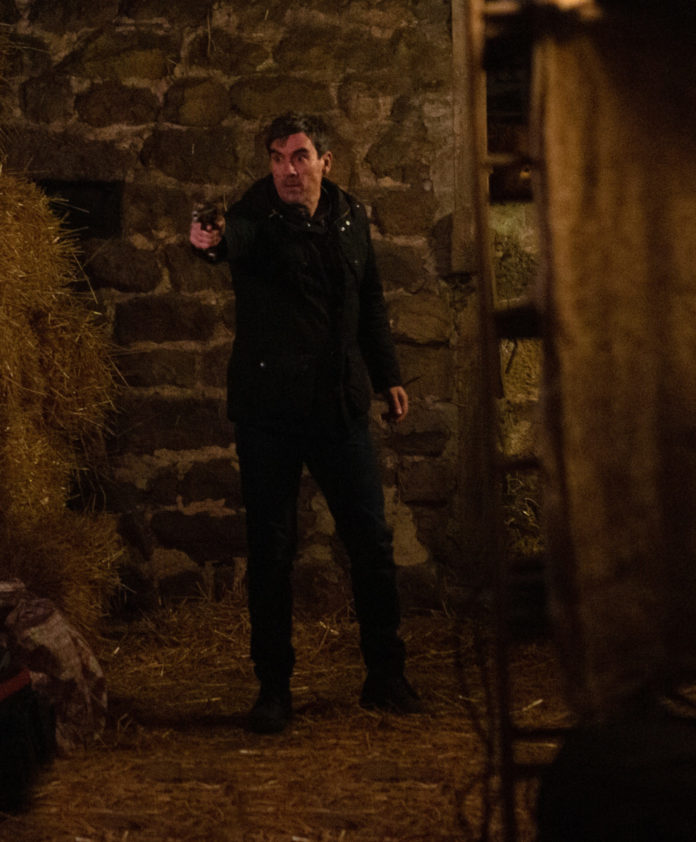 EMMERDALE’s Cain Dingle shoots Moira Bartons mystery attacker thinking theyre one of the livestock thieves – but the pair are horrified by the figures true identity.

The farmer was gunning for trouble when she pulled a gun on the gang of rustlers to protect her family.

Emmerdale fans know that Cain is set to break Moiras heart once more in upcoming episodes when he hands her the divorce papers.

He also steps in to warn Matty about livestock thieves operating in the area.

Matty ignores the warnings from Cain and ends up in a sticky situation.

Luckily, Moira steps in to save the day and threatens the thieves with a gun.

In further upcoming episodes,Moiras exhausted after a sleepless night keeping watch for the thieves.

She reveals to Matty and Victoria that shes signed the divorce papers Cain thrust in her face.

Victoria urges Moira to talk to Cain about it all, but theyre interrupted by Nate who bursts into the scene to warn about rustlers.

The next day, Nate tentatively asks Cain if theres any way he can help reconcile him and Moira, but Cain is furious at the suggestion.

When Cain calls Moira his missus, Nate suggests he still has feelings for his wife.

They are immediately on edge when they hear a noise from outside.

Eventually they realise that its just a broken door and collapse in relief asMoira demands to know where Cain got the gun that hes holding.

When he refuses to say, Moira insists he still loves her.

But Cain says nothing, and rushes to the fields to continue his search.

Cain is horrified to find the body of a dead sheep and realises he’s left Moira unarmed and in danger.

He reaches for his gun and rushes back towards the barn where Moiras waiting.

Inside, Cain panics and shoots the mystery figure approaching Moira.

But when he turns on his flashlight and illuminates the figures face, theyre shocked to see they recognise who it is