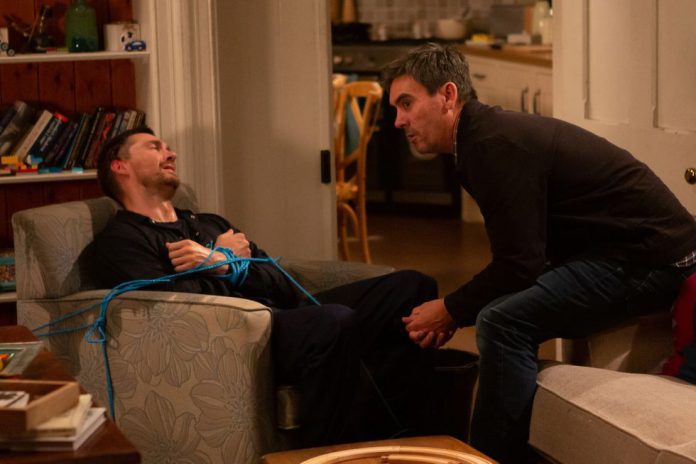 POOR Pete Barton is about to endure the wrath of Cain Dingle in Emmerdale as Faith tells Cain that his wife, Moira, has been cheating.
But Faith whos played by Sally Dexter in the ITV soap has got things very wrong indeed.

In tonight’s episode of Emmerdale, shell be seen telling a bemused Cain that Moira has been cheating on him with former flame, Pete.
And while Cain tries to take it all in, he tells Moira hes not going to the agricultural show with her.
An oblivious Cain sends Nate Robinson in his place, not realising the hunky farmhand has been sleeping with his wife.
As Moira and Nate head off for a few days of uninterrupted naughtiness, Cain has a plan for poor Pete.
He calls him to Butlers, before brutally knocking him out and tying him in a chair.

Pete is horrified as an angry Cain accuses him of sleeping with Moira, which is obviously totally wrong information.

And Cain isnt scared of getting handy with his fists as he tries to get Pete to confess to sleeping with Moira.

Tied up and being tortured by Cain, an unhappy Pete eventually tells Cain that its Nate who Moira is sleeping with, not him.

A stunned Cain reels as he realises hes sent his wife and her lover off on a cosy mini break together.

As Petes words hit home, a rage fuelled Cain will head off in pursuit of his wife and her lover.

But as things reach boiling point between Nate and Cain, a revelation is made which changes everything.

But will Cain, Moira and Nate all live to see it through?

MUCKY Moiras life will be left hanging in the balance as Cain finds out the truth about her steamy fling with Nate.

And as a murderous Cain coerces Moira and Nate onto a boat where he confronts the hunky farmhand over the affair, Moira is knocked overboard into the water.

Betting firm Bookmakers.tv have given odds of 2/1 that Moira will die during the incident.

A spokesperson for the firm told the Daily Star: “;Fans of Moira have every reason to be worried as she is trapped underwater having fallen overboard.”

Rashford warns MPs not to ‘turn a blind eye’ to vulnerable children ahead of...