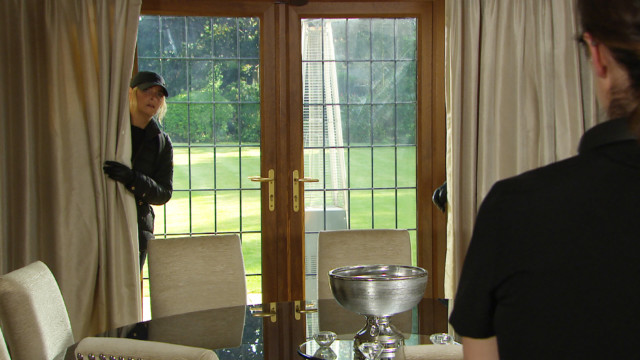 THERE’s trouble ahead for Charity Dingle and Mackenzie Boyd as they launch a money-making scheme at the expense of Chloe.

The pair teamed up recently after discovering that Chloe, the sister of Sarah Sugden’s late heart donor Gemma, came from a wealthy background.

Next week, Charity and Mack continue on their mission to rob Chloe and break into her house.

They steal a display case of watches, but come to a standstill when they encounter a maid cleaning.

Charity gets another shock when she realises the maid is none other than Kerry Wyatt.

When Chloe returns home, Kerry covers for Charity and Mack but later warns them not to mention that they’ve seen her.

Before the pair leave, Kerry forces them to hand over the stolen goods, but her plan clearly fails as she later gets a message from Chloe’s dad complaining that one of his watches is missing.

Viewers will then see a mysterious figure watching Charity and Mack from a parked car, but who is it?

Talking about her comeback storyline, Laura recently told The Mirror: “(Kerry has) got a job as a cleaner/dogsbody for a family in a multimillion-pound mansion.

“She forms a bond with her employer’s daughter but, while the daughter, Chloe, is lovely, she realises that the father is dodgy.

“It’s really dark stuff and she starts to try to come up with ways to get away. There are a few interwoven storylines.

“This girl’s sister was an organ donor for Sarah Sugden. And then Charity Dingle turns up at the house to try to rob it. She sees Kerry there and says, ‘What the hell are you doing here?’ Kerry forces Charity to hand over what she’s taken, but then Kerry gets a message from Chloe’s dad saying that one of his watches is missing.” Kerry begs Charity not to mention she’s seen her