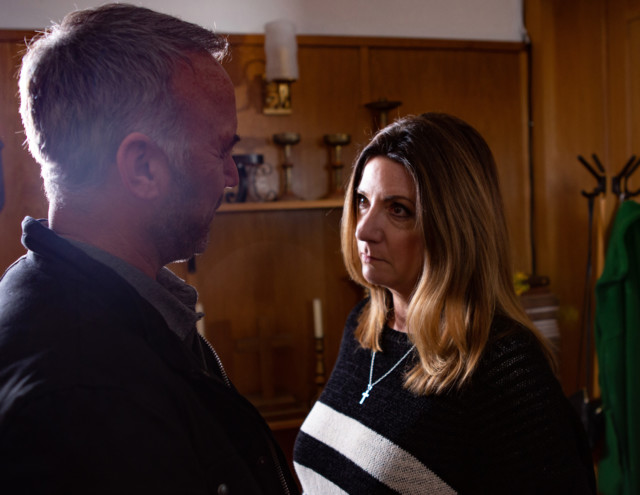 HARRIET Finch reports DI Malone’s corrupt cop organisation to the police next week in Emmerdale before she rages at Will for putting her family in danger.

Will is beaten black and blue in upcoming scenes – leading Harriet to discover that Malone is blackmailing him.

Emmerdale viewers know that DI Malone has been making Will’s life a living hell on the show – ever since he arrived to investigate the shooting incident – by forcing him to carry out his dodgy drugs operations.

When Will’s partner Harriet grew suspicious of his actions, she called up an old friend who she knew from her time as an undercover cop – who just so happened to by Malone.

Harriet asked if he’d had any joy in tracing Will’s gun back to his old gang, but Malone insisted they’d not had any leads on the weapon.

Malone then made a dig at her for dating Will, and implied he’d be a better match for Harriet.

He told her: “We both know that the past doesn’t always stay buried Harriet. If you want me you know where I am.”

Episodes of Emmerdale set to air this week will see Harriet discover the truth about Malone after Will stumbles home covered in bruises and marks.

The upcoming scenes will see Malone order Will’s beating after he warns Cain and Billy that they’ve been set up for arrest by Malone. Harriet is annoyed with Will for putting her family at risk

Next week’s episodes of Emmerdale will see DI Malone inform Harriet that he’s put a stop to his dodgy dealings with Billy, Cain and Will.

But Harriet still has her suspicions and calls the police with the intention of revealing Malone’s corrupt ways.

But she ends up backing down when Malone promises to stay away from Will. Harriet then has an argument with Will and has a go at him for putting her family in danger.

The vicar then makes a huge decision and leaves Will devastated – but what will it be?

Later in the week, Malone and Harriet bump into one another again.

Emmerdale has teased that the encounter will confirm that there’s more to their relationship than it first seemed.

The big question is: did they have a romantic relationship?

And if so, might Harriet get hot under the collar again and rekindle what they had before?

Keir Starmer revealed he was known as Special K – street name for a...