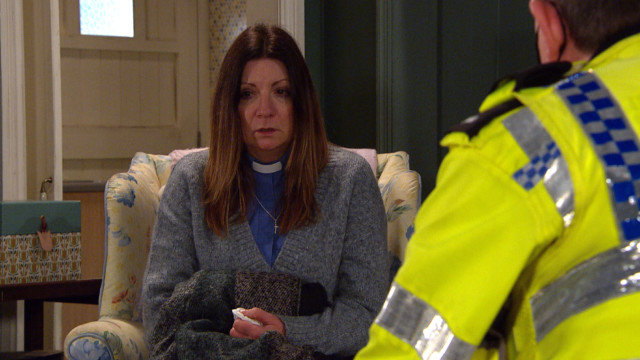 HARRIET Finch imprisons herself in her cellar to atone for her crimes next week in Emmerdale.

The morally questionable clergywoman – who is played by actress Katherine Dow Blyton in the ITV soap – will send herself into a spin and rant to the police about Malone’s body.

Harriet blabs to the police about ‘a body’

Will tries to stay calm when he realises Harriet has disappeared but panics when he sees a police car pull up.

Meanwhile, Harriet rants to PC Swirling at the police station about ‘a body’.

Will tells the police that Harriet has been finding the exhumation overwhelming – and that must be the body she’s speaking about.

Will tells the police Harriet must be talking about the exhumation Harriet begs Will to punish her

Later, Harriet begs Will to punish her and silence her to save them both.

Will later hides Harriet’s phone in a drawer and tells Dawn that Harriet has gone away on a church retreat.

Later, Will heads down to the cellar where Harriet sits with her bible and some food, repenting for her sins.

When Will asks Harriet how long she’ll need to be down here for, she tells him she can’t give an exact answer. Harriet repents for her sins in the cellar

Will Harriet ever emerge?

Harriet and Dawn killed corrupt officer Mark Malone in self defence back in August and buried him in an occupied grave in the church’s cemetery.

But, after the true occupant’s daughter decided that she wanted to move her body elsewhere, Harriet and Will realised they had to move the body.

Will moved the body to a grave on Home Farm land, but Harriet began to be overwhelmed by her guilty conscience.

Viewers were concerned when she began visiting Malone’s grave under the cover of darkness to ease her conscience.

Did you miss our previous article…
https://www.hellofaread.com/soap-opera/hollyoaks-stars-reveals-more-sickening-abuse-scenes-are-on-the-way-for-george-and-john-paul/