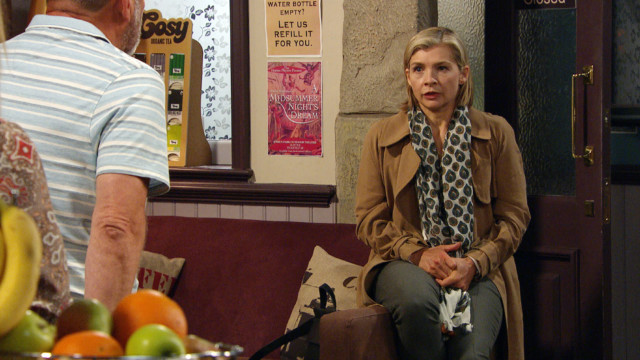 JULIETTE Holliday drops a bombshell on her son Carl and dad Jimmy King next week in Emmerdale.

Juliette decided she wanted custody of Carl five years after abandoning her son and handing him over to Jimmy.

Juliette drops a bombshell on Jimmy

Next week, however, Juliette drops another bombshell on Jimmy on Nicola, but what will it be?

Jimmy and Nicola are stunned and discuss how they’re going to break the news to Carl.

Later, Nicola tells Jimmy he’ll have to move back in to help look after Carl.

Jimmy is thrilled to be back home but will his happiness be short-lived?

Emmerdale bosses have teased a huge fight between Nicola and Mandy this week as they lock horns over Jimmy.

Viewers know that Nicola was humiliated when Jimmy confessed to kissing Mandy in recent scenes.

The love rivals will get into a physical fight at Angel’s birthday party in upcoming scenes after the cafe owner starts bad mouthing her behind her back.

Teasing what to expect, actress Nicola Wheeler – who plays Nicola in the soap – told TV Mag: “What I love about the fight is it’s very comedic. It’s not done in a cat fight way with scratching and slapping.

“We start using all these childish props and they start whacking each other, poor Rodney gets hit.

“Then it turns into a water fight, Rodney and the barista get it in full throttle, then the cake becomes involved.

“And what a coincidence, there happens to be two cakes so there’s a face in each cake.

“It just becomes this kind of brawl, it’s not a full on aggressive fight, it’s very funny. It’s meant to make the audience laugh.”

Nicola and Jimmy break the news to Carl

Did you miss our previous article…
https://www.hellofaread.com/soap-opera/where-the-gavin-and-stacey-stars-are-now-as-joanna-page-reveals-shes-pregnant-with-baby-number-4/

Zara McDermott almost spills out of her top as she admits getting ‘excited’ to...