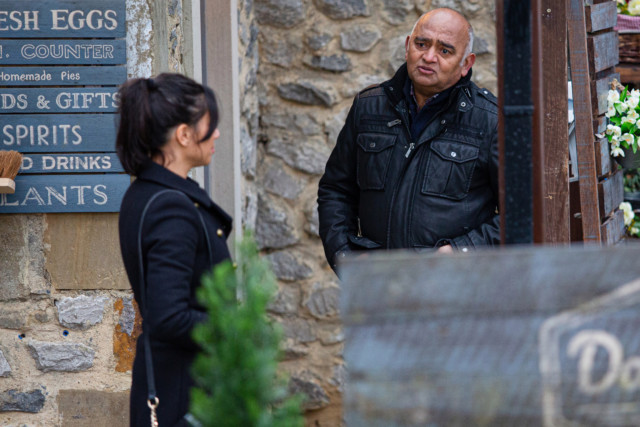 MANPREET Sharma’s lies destroy her marriage to Rishi as her fake death is exposed next week in Emmerdale.

Manpreet – who is played by Rebecca Sarker in the ITV soap – will beg Charles to keep her shock identity secret this week after the vicar addresses her as his dead ex Saira – and announces he thought she was dead.

Priya and Jay fuss over Rishi

But it looks like Manpreet’s secret will come exploding out next week as Priya and Jay fuss around a heartbroken Rishi.

Viewers will see a furious Rishi refuse to even look at Manpreet.

Later, at the Hide, Jai tries to console Rishi, but he insists there’s no way back for him and Manpreet now.

Will Manpreet have an explanation up her sleeve to win Rishi back?

Rishi refuses to even look at Manpreet Speaking about the twist, Kevin Mathurin – who plays Charles  in the ITV soap – recently told Digital Spy: “Let’s just say that Charles and Manpreet do have a history. When Charles sees Manpreet, it’s like seeing a ghost and it’s very unexpected.

“Out of all the places in the country – all of the different parishes that Charles has been working in – he now finds this person who he hasn’t seen for 15 years.

“They’re both absolutely shocked. As far as Charles is concerned, Manpreet was dead.”

He continued: “Afterwards, Charles just wants an explanation for what has been going on and where Manpreet has been. He wants to know why Manpreet suddenly disappeared.

“There’s going to be some revelations. Let’s just say Manpreet isn’t exactly who Charles thought she was.

“He knows her as ‘Saira’, so for her to suddenly say that her real name is Manpreet, he wonders what other lies she has been telling him. There’s a lot of past to be dug up.”

Emile John, who plays Charles’ son Ethan, has revealed that his character considered Manpreet as his mother before she disappeared.

He said: “Ethan is aware of the connection between Charles and Manpreet.

“All the trauma and pain from not one absent mother but two will all come flooding back to him.

Did you miss our previous article…
https://www.hellofaread.com/soap-opera/the-celebs-who-got-normal-jobs-after-shunning-tv-fame-including-the-eastenders-star-who-now-works-in-bm/

Schoolboy, 12, held at gunpoint for playing with toy gun says ‘I thought they...

Meghan Markle walking away from the Royal Family is insulting and will end in...

PS5 drops some weight in a NEW redesign

Coronavirus home kits run out for fourth day in a row in just an...