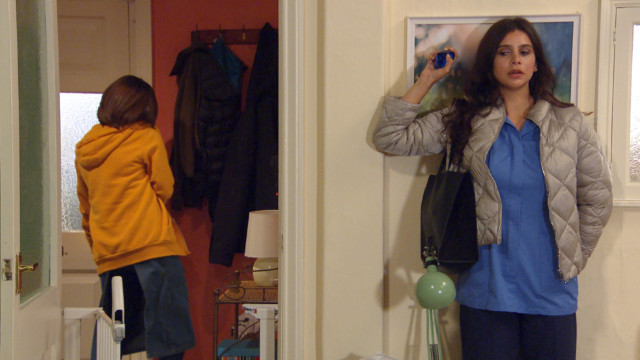 The serial killer pushed Leanna Cavanagh off a bridge earlier this year after the teenager discovered she’d murdered her best friend Nadine.

In scenes set to air this week, Meena plans her next murder as she lures her love rival Victoria Sugden away from the village.

Next week, viewers will see Meena let herself in with Amy’s keys and start to mess with Victoria’s things.

When she hears Victoria enter, she grabs a paperweight and prepares to use it, but manages to stay out of sight until her phone buzzes at the wrong time.

Victoria rushes out, threatening to call the police, but Meena sneaks out through the back door.

Manpreet explains to Meena that her sister Aiesha has been taken into hospital in Ibiza and is in critical condition.

As Manpreet begs for Meena’s help, Meena spots David and Vic in the corner of her eye and struggles to tear herself away.

After talking to the police about the break-in, Chas and Victoria are suspicious about Meena’s reluctance to join Aiesha and David tries to convince her to go.

David’s suspicions are piqued when Vic’s paperweight falls out of Meena’s bag right in front of him.

Will he realise it belongs to Vic?

Emmerdale viewers know this won’t be the first time the killer has slipped up in front of David.

Meena made a huge error when she played with Leanna’s ring on a chain around her neck after the youngster’s funeral.

David failed to notice the ring’s connection to Leanna, but might things fall into place after he spots the paperweight next week? Boris under pressure to relax more lockdown rules as Scotland and Northern Ireland will...

EastEnders is reborn but the same old bias is still there for wall to...

EastEnders’ Maisie Smith shows off washboard abs as she soaks up the sun in...

Boris Johnson gears up for ‘do-or-die’ battle to save the Union if Nicola Sturgeon...