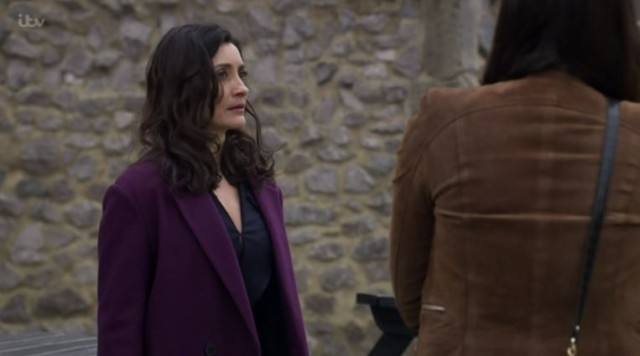 MEENA Jutla’s sick scam over Ethan Anderson’s long-lost mother set to be exposed as Manpreet talks to Charles next week in Emmerdale.

Manpreet recently agreed to help the lawyer – who is played by actor Emile John in the ITV soap – find his biological mother but told him not to tell her ex Charles.

Viewers know that Manpreet then arranged a reunion between Ethan and his estranged mother after finding her through medical records, only for his mum to be a no-show.

Meena was then revealed to be texting Ethan and pretending to be his mother.

Fans were left convinced that the duo are hiding something about the identity of Ethan’s mother.

Next week, Ethan continues to confide in Manpreet about his mother, but when Charles arrives he scarpers.

Will Manpreet come clean to Charles and tell him what Meena is up to?

Emmerdale fans are convinced that Manpreet – who used to date Charles but vanished from their lives 15 years ago – will turn out to be Ethan’s mother.

Could this be why Manpreet is hiding things from Charles? Speaking on Lorraine last week, Emile John – who plays Ethan – warned that his character “is not to be messed with” when it comes to maternity plot twists.

He revealed: “Ethan is a very sort of self-righteous person, he has everyone’s best interest at heart but he is very honest, a very honest person.

“If anyone is being done wrong to, he will stick up for them as he’s got a really good, strong moral compass.

“But he is not anyone to be played with, you don’t mess around with Ethan because he will come at you with full force and fire and he’ll tell you about yourself.”

Emile added: “He is a really sort of fully-fleshed three dimensional character, he hurts, he’s got issues with his mother, he doesn’t know his mum so there’s a lot to play with.”

I’m A Celebrity campmates break down in tears and insist they will be ‘friend...

Which pubs have opened in the UK and what are the opening hours?