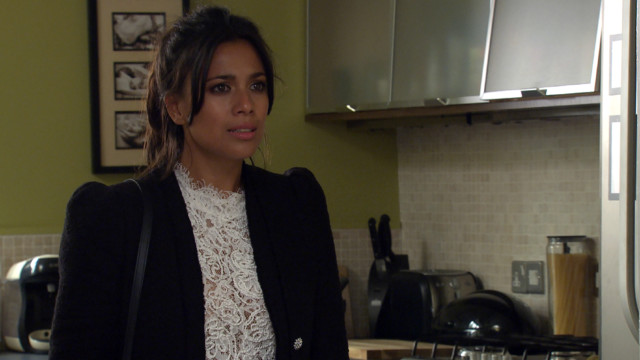 PRIYA Sharma convinces herself that Al Franklin is cheating on her with another woman next week in Emmerdale after he lies to her about being in possession of a gold bracelet.

Sarah Sugden stole Al’s bracelet from Holdgate after she broke in to find answers on the whereabouts of Kirin Kotecha – and all hell breaks loose when she returns it to Priya next week.

Priya discovers Sarah snooping and asks her what she’s doing

Emmerdale fans know that Charity Dingle is on a mission to find her step-son Johnny’s biological father, Kirin, so that she can go ahead with the adoption.

Growing suspicious that Priya knew more about Kirin’s whereabouts than she cared to disclose, Sarah broke into Holdgate and had a rummage around as well as stealing some jewellery.

Next week’s episodes of Emmerdale will see Priya discover Sarah and ask her why she broke into her home. Priya realises Sarah has stolen some of her belongings

But Sarah is unapologetic and snatches Priya’s phone before rushing outside.

Checking through Priya’s texts, Charity realises that Sarah has got the wrong end of the stick about Priya.

Later, a reckless Sarah shows Noah the ring and bracelet she swiped from Holdgate. When Sarah returns a gold bracelet, Priya assumes Al is cheating on her with another woman

Meanwhile, Priya realises that her ring has been stolen and tells Al about Sarah breaking in.

Al checks his laptop bag and realises his gold bracelet is missing, but hides the development from Priya.

But Priya is left baffled when she spots a gold bracelet among the items.

Later, when Al insists that nothing of his was stolen by Sarah, Priya starts to wonder if he bought the bracelet for another woman.

Will her suspicions be confirmed?