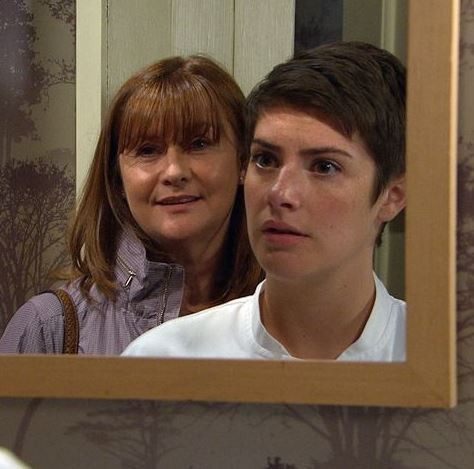 EMMERDALES Victoria Sugden will be left devastated when her rapist Lee Posners mum Wendy moves to the village.

Victoria was left in turmoil after being violently raped in the ITV soap and in upcoming scenes is forced to relive her trauma when her attackers mother insists shes sticking around for good.

Emmerdale viewers were horrified when Victoria was attacked by a man named Lee shed met on a night out earlier this year.

The scenes left little to the imagination and fans were sickened by the graphic storyline.

Following Victorias turmoil, she discovered she was pregnant with her rapists child.

To make matters worse, Victorias next love interest Luke Posner turned out to be the brother of her rapist.

The pregnant chef’s brother Robert brutally attacked Lee with a spade this summer as the thug taunted him about attacking Victoria.

Lee was in a coma after the attack before dying – leaving Robert sentenced to life in prison after pleading guilty to murdering the evil rapist.

Robert finished rapist Lee off after he taunted him about Victoria

In an upcoming episode, Lee’s reign of terror over the family will continue as Diane discovers that his mother Wendy is moving to the village.

The matriarch is horrified and tries to stop vulnerable Victoria from finding out.

But its not long before Victoria catches wind of the new arrival and she is devastated to have the past dragged up again.

Robert was sentenced to life for murdering Lee in Emmerdale

Lees brother Luke insists he didnt know and when he confronts his mum, Wendy is furious when he says he believes Victoria over Lee.

Wendy then breaks down, but insists that she wont be budging.

Later that night, someone smashes the windows of Dale View.

Wendy is on edge as she shouts into the darkness at the unknown perpetrator – but who is the culprit?

Viewers will have to tune in to Emmerdale to find out, as exact plot details are being kept under wraps for now.

Chatty Archie calls Prince Harry ‘Dada’ as he films him and Meghan Markle at...