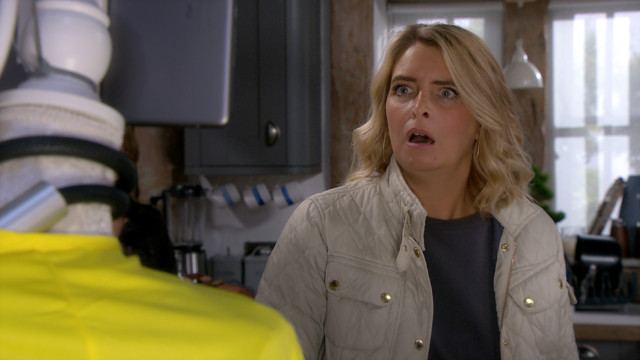 EMMERDALE’S Vanessa Woodfield makes a shock appearance via Zoom next week to celebrate her and Charity’s anniversary.

Vanessa – who is played by Michelle Hardwick in the ITV soap – departed from the village in May as she continues to battle bowel cancer.

Charity’s worries disappear when she and Vanessa celebrate their anniversary

Charity’s casual announcement last month that Vanessa had already left the Dales to stay with her mum left fans fearing that the pair might split up.

And viewers know that Charity has been feeling lonely and anxious not having heard from Vanessa for a while.

On top of that, Charity’s mission to adopt Vanessa’s son Johnny was nearly thwarted when Kirin showed up in Emmerdale village in September. Kirin was quick to blackmail Charity into giving him a load of cash – or he’d stop her adopting Johnny.

But after Paddy rang the police and Kirin injured himself trying to break into the garage, Charity dressed up as a nurse and confronted Kirin in hospital.

Charity then made a false promise to get him out of hospital if he signed the adoption forms, which he agreed to. Tracy and Rhona are thrilled to see Vanessa too

Next week’s episodes of Emmerdale will see Charity’s paranoia subside when she has a virtual romantic anniversary with Vanessa.

Charity has a hoot as she enjoys dinner with a mannequin with a tablet stuck to its head and Vanessa’s face on the screen.

Will she be united with Vanessa soon?

Speaking about how Charity’s mission to adopt Vanessa’s son will continue despite Vanessa’s absence, the actress told Metro: “Charity adopting Johnny is a massive step in their relationship.

“Obviously with me not being on-screen for the foreseeable due to my pregnancy, the story will continue going forward as Charity navigates her life and parenthood in the absence of Vanessa.”

Scots will be ordered to wear face coverings in ALL shops from July 10,...

How old was Prince Harry when Princess Diana died?