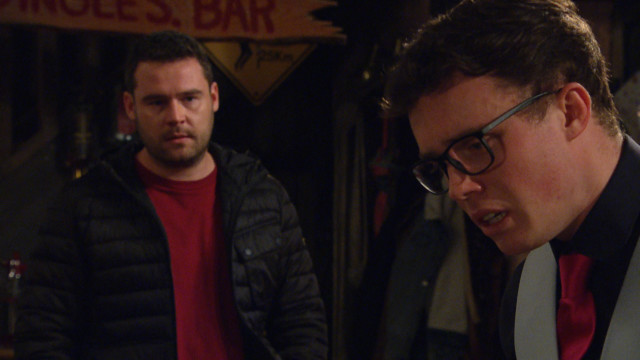 VINNY Dingle buries dead dad Paul Ashdale by himself next week as the village refuses to honour the abuser.

But next week, Vinny will remain in denial about Paul’s abusive nature as he braces himself to honour Paul’s memory.

As the hearse arrives outside the Dingles’, Mandy is on edge and asks Lydia to keep Vinny inside while she heads out to say goodbye to Paul her way.

Mandy struggles to control her emotions as she speaks to Paul’s coffin, telling him he doesn’t deserve a funeral.

But it all kicks off when Vinny walks out and hears her slagging off Paul.

Disgusted, he tells her she should be ashamed of her actions.

Viewers will then see Vinny walking all alone through the village behind the hearse. Liv is desperate to show Vinny her support, but he refuses to even look at her.

Inside the church, Vinny tries to read out his eulogy but struggles and ends up fleeing the premises.

Speaking about Vinny’s confusion, Bradley told Digital Spy: “Vinny’s reaction is one of confusion. He has had a year of this physical and mental abuse. He has ruined his relationship with Liv and I think he’s now lost himself completely.

“Vinny is finding it hard to comprehend how to deal with this situation. He is a broken man at the moment, with complete confusion over what to do next.

“Vinny is very much like that, as he has given his dad countless chances. Even after everything Paul has done, he just wants to forget all of that negative stuff and see his dad in a good light.”

How long will Fornite be down for?