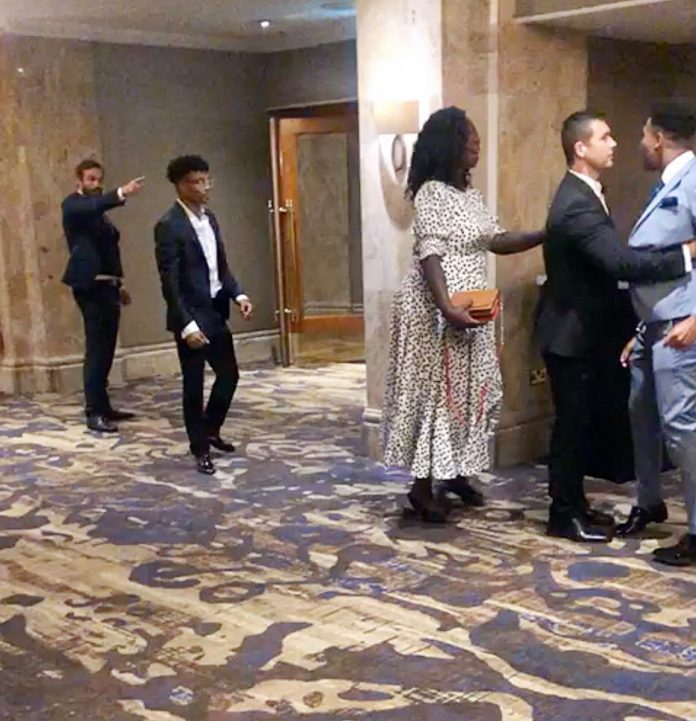 SACKED Emmerdale star Asan N’Jie has been bombarded with sickening abuse after his stab row with Jamie Lomas.

The 25-year-old actor has turned the comments off his photos on Instagram again after he returned to social media following an explosive row at last month’s TV Choice Awards.

He’s now revealed that he is being taunted online and one such comment, which MailOnline reports has now been deleted, said: “Imagine bringing you 3rd worlders into the civilise world. Hope you never get work again you disgusting subhuman”

Asan, who returned to social media two weeks ago, replied: “Wow. Saynotoracism. I’m bulletporrof so comments like this would never touch me.

“But on this occasion instead of ignoring it, why not show everyone how upside down the world is? #noroomforracism.”

Meanwhile, his latest photo on Instagram is a picture of him and his mother, but the disgraced soap star has disabled comments on the post.

Haaaaaaa! Look what I found! Mums got SWAG yano!!

All the people whove reached out and had my back youll never know how much I appreciate you. Ive learned, Ive grown and now Im working harder than ever to finish what I started. Keep youre circle tight and always fall forward! The universe tends to unfold as it should.

Asan has been targeted on social media, with a source telling The Sun Online: “Some of the abuse was horrific.”

Explaining why the actor switched off comments on his Instagram page: “He had to take steps to protect himself.
“The vile comments were getting out of control.”

Asan joined Emmerdale last year, playing fan-favourite Ellis Chapman, and was even nominated in the Best Soap Newcomer category at the ceremony.

Ellis is so popular with viewers that fans begged show bosses to recast the character rather than axe him completely after news of Asan’s firing broke.

Producers were left fuming when news of the bust-up broke, with a clip showing Asan screaming: “Do you think you are a f***ing big man? I’m going to f***ing kill you” at 44-year-old Jamie.

According to the Mirror, he then added under his breath: “Im going to f***ing knife you.”

Asan was escorted off the premises by security staff and was axed from his role yesterday after an emergency meeting with show bosses.

The star was set to “get down on his hands and knees” to plead for a second chance but the execs saw no other option but to terminate his contract.

The Sun previously revealed that the two men fell out over money, with one of Asan’s pals in a financial dispute with Jamie – his former agent.

An insider explained: “Jamie had guided this young lad’s career and was responsible for him landing a gig in Emmerdale.

“However since then, he has decided he wants to leave Jamie’s agency, which Jamie is fine with, but he wants the commission he is owed.

“He is entitled to this money but it’s currently the subject of a private and personal dispute.

Since joining Emmerdale, the unidentified actor has befriended Asan, who has learnt of his financial disagreement with Jamie and when the two came face-to-face at the TV Choice Awards he allegedly decided to goad his mate’s former agent.

Our source revealed: “Asan went up to Jamie and started goading him, saying things like, ‘Alright, Jamie big b*****ks’.”

The next minute, the pair had to be pulled apart by fellow stars.

Asan issued a grovelling apology, saying in a statement: “My behaviour at the TV Choice Awards was completely unacceptable and very much out of character.

“I sincerely apologise to everybody who has been affected especially Jamie Lomas, the whole Emmerdale team, our audience, ITV, my family, and the organisers of the TV Choice Awards.

“I am devastated, accept full responsibility for my actions and I am determined to learn from this.”